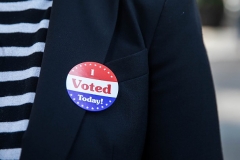 (CNSNews.com) - "I will do everything within my power to ensure the results are fair and that every vote is counted," Pennsylvania's Democrat Governor Tom Wolf told a news conference on Wednesday.

"Pennsylvania will have a fair election. That election will be free of outside influences. I will vigorously, and we all will defend against any attempt to attack that vote in Pennsylvania."

The governor was referring to President Donald Trump, who already has complained about his vanishing lead in swing states:  "So we’ll be going to the U.S. Supreme Court," Trump said very early Wednesday morning.  "We want all voting to stop. We don’t want them to find any ballots at 4 o’clock in the morning and add them to the list, okay?”

Trump tweeted later on Wednesday: "How come every time they count Mail-In ballot dumps they are so devastating in their percentage and power of destruction?"

Gov. Wolf told the news conference, "Every Pennsylvanian can have confidence in the outcome of this election due to the due diligence of the county election officials and the hard work of Secretary Boockvar and her folks at the Pennsylvania Department of State. Thank you again to all Pennsylvanians who voted. Rest assured your vote will be counted if it hasn't already been counted. Your vote will make a difference in this election."

The commonwealth's top election official, Secretary of State Kathy Boockvar, followed Wolf to the podium shortly after 10:30 a.m., thanking all the election workers who are still counting ballots. She said the election was "incredibly smooth."

Also, we are exactly where we said we would be. So we said it would take some time to count the mail ballots. And we are approaching 50 percent of the mailed ballots counted, which is great...But there are still millions of ballots left to be counted. So the counties are working incredibly hard.

You're going to see a lot of updates in the next couple of hours and throughout the day. We have been -- there were a number of counties that made some major additions in the wee hours of the morning. So if you checked kind of early on this morning you may want to check again because there's already been more ballots accounted for on our dashboard. Again, this is a process.

The U.S. Supreme Court agreed that Pennsylvania may have three extra days, until Friday, to count mailed-in ballots that are postmarked by Nov. 3.

Pennsylvania has been ordered to segregate mailed ballots that arrive after Nov. 3, in case those results are later challenged and thrown out.

Boockvar on Wednesday said late arriving ballots “will be segregated."