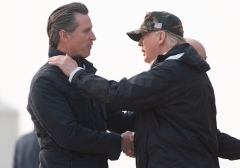 (CNSNews.com) - Professing "reverence and respect" for the current president, California Gov. Gavin Newsom said he has no intention of offering advice to Biden or his fellow Democrats "unless it's sought." But, he added, "I will observe though, as just a taxpayer, that it's COVID, stupid."

Newsom told NBC's "Meet the Press" that while other issues are important, the main focus should be on getting the pandemic behind us.

He voiced impatience with all the attention on the reconciliation bill that contains much of the Democrat agenda:

But, I mean, this political death march of who's up, who's down, Manchin this, Sinema -- I can't take it anymore. No one can take anymore. Just enough, like, stop. Just get something done. And it looks like they're finally going to get something done.

And watch, miraculously, numbers will start going up. They actually delivered. Now you can go out and say what you did -- no one even remembers what was in the original $1 trillion package and all the good infrastructure investment.

They just know no one's getting any damn thing done, and it's driving them crazy. And, of course, they're going to blame who's ever in the executive branch. And so, I think all that changes as long as the focus reverts immediately back to the reason why he was elected in the first place and that was to get COVID behind us. Every question you've asked me has that connective tissue.

Newsom easily survived a recall election, an event he call "humbling beyond words." After winning, he was asked if he has "presidential ambitions."

"No, none, never," Newsom replied.

But he told Chuck Todd that he's more willing to take risks nowadays:

I can't stand that my neighbor, you know, if he could, he'd put a Confederate flag up, but he's put pretty much every other flag up. And he didn't want to talk to my daughter when she bought him an egg and wanted to give him an egg and said, get off my door, like and he loves his grandkids. I see his grandkids there all the time.

We share a neighborhood. You know, he cares about the same things I care about. But maybe our politics are a little different and we've just seen politics so damn weaponized.

There's just a sense of determination, intentionality. Time is completely refocused. I'm more energetic, and I'm more willing to take risks. And it's not as if I've had a career where I have not leaned in, quite the contrary.