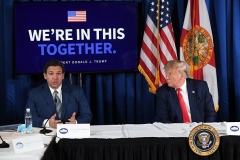 The governor noted that his state processed its 11 million ballots by 10 p.m. on Election Day with no problems, and he said "transparency" is the key:

When I came in, I removed the Palm Beach Supervisor of Elections, got the resignation of the Broward Elections Supervisor Brenda Snipes. So there were new teams into those problematic South Florida counties. They did a great job. It was much smoother.

And also, Florida is very transparent -- as people vote, either by mail, early, or in person on Election Day. You know how many people are going in. You know the party breakdown in real time. It's constantly being updated. So what we basically know is the universe of people that have voted.

It's much harder to have any funny business if you know how many votes are outstanding. And so I think the transparency and the efficiency -- and look, we are a much larger of a state than a lot of these other places that are struggling. We were able to process over 11 million ballots, most of those by 10 P.M. At night.

There's no reason for what's going on in these other states.

DeSantis also said media outlets should have called the Florida race a win for Trump at 8:30 p.m. And he said Fox News never should have called Arizona for Biden so early in the evening. As he spoke, the votes were still being counted in Arizona, and Trump was leading by a small margin.

DeSantis said a delayed outcome undermines people's trust in the election, "especially when you have these vote dumps that are happening a day or two after election night. One candidate has a huge win and then the fortunes change. It causes people to have no confidence in the process."

The Trump campaign, not trusting the vote-counters in Democrat strongholds, is now suing three states that are still counting mailed-in ballots -- Michigan, Pennsylvania, and Georgia.

In Georgia, the campaign is suing to segregate late-arriving ballots so they can be tossed if the courts rule in Trump's favor.

At a news conference in Philadelphia on Wednesday, Eric Trump said ballot counters in that city are "trying to cheat."

And now they won’t let, and we brought one great gentleman here with us today, Jeremy, who’s a poll watcher down at the convention center. They won’t even let him watch as they count the ballots. They put them behind a fence, 40, 50 yards away where they actually can’t see the counting happening.

Guys, this is fraud. This is absolute fraud. We’ve seen it in Philadelphia before. They’re trying to make a mockery of the election of this country.

Trump attorney Rudy Giuliani, speaking at the same news conference, said both parties have the right to observe mailed-in ballots, just as they do with absentee ballots.

"What it says to me is this is a concerted effort of the crooks that run the Democratic Party. And you know, these big city machines are crooked. You know that," Giuliani said.