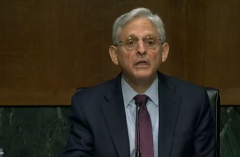 (CNSNews.com) - Attorney General Merrick Garland told the Senate Judiciary Committee on Wednesday that he stands by his controversial October 4th memo that directs the FBI, working with federal prosecutors, to meet with state and local law enforcement to discuss "strategies for addressing threats against school administrators, board members, teachers, and staff."

Garland said he signed and "worked on" the memo, which followed a plea for a federal crackdown by the National School Boards Association.

Garland’s memo says the Justice Department "is committed to using its authority and resources to discourage these threats, identify them when they occur, and prosecute them when appropriate."

Garland told Sen. Chuck Grassley (R-Iowa), "the only thing we're concerned about, Senator, is violence and threats of violence against school officials, school teachers, school staff. Just like we're concerned about those kind of threats against senators, members of Congress, election officials -- in all of those circumstances, we are trying to prevent the violence that sometimes occurs after threats."

"What are you doing with those parents who have been reported" on the tip line?" Grassley asked him.

"The FBI gets complaints, concerns from people around the country for all different kinds of threats and violence," Garland responded.

“That's what this is about. A place where people who feel that they've been threatened with violence can report that. These are then assessed and they are only pursued if consistent with the First Amendment, we have a true threat that violates federal statutes or that needs to be referred to a state or local law enforcement agency for their assistance."

Critics of the memo -- including many parents, Republican politicians, and even some local school boards -- say the memo is intended to chill the speech of furious parents who may fear a knock on the door from the FBI after speaking at a school board meeting.

Garland said that his memo makes clear in the first paragraph that "spirited debate on policy matters is protected under our Constitution."  That includes criticism of school boards, he said.

Garland refused several times to say whether he considered the "chilling effect" his memorandum would have.

The National School Boards Association has now apologized for some of the language used in its letter to the Biden administration, including characterizing upset parents as potential domestic terrorists.