Flynn's Attorney: 'Absolutely' This Goes All the Way to Obama 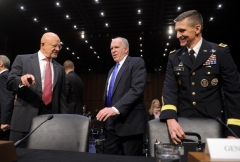 (CNSNews.com) - Sidney Powell, Gen. Michael Flynn's lead attorney, said the timeline of the FBI's dealings with Flynn leaves no doubt in her mind that President Obama knew about the attempt to "frame" Flynn and knock him out of his job as President Trump's National Security Adviser.

"So you think this goes all the way up to the top, to President Obama?" Maria Bartiromo, host of "Sunday Morning Futures," asked Powell.

"Who is going to be charged?" Bartiromo asked.

"I have no idea," Powell said. "That's up to (U.S. Attorney) John Durham and Attorney General Barr," she said.

Flynn pleaded guilty to making false statements to the FBI, but he recently retracted his guilty plea, and last week, the Trump Justice Department filed a motion to dismiss the case against Flynn.

"His reaction at first was one of disbelief and relief at the same time," Powell said. "It's going to take a while to process it. He's obviously very grateful to the attorney general (Barr) and Mr. Jensen (the U.S. attorney in St. Louis who recommended dismissal) for having the integrity to dig for the truth and to get it out for the American people to see. And he is looking forward to spending time with his family.

"I'm sure he will have a statement to make sometime in the near future."

Powell said she expects the federal judge in Flynn's case to approve the motion to dismiss on Monday "or sometime early this week."

Powell repeated what the motion to dismiss sets out -- that FBI agents "specifically schemed and planned with each other" on how to avoid tipping off Flynn that he was the subject of an FBI counterintelligence investigation.

Flynn viewed the FBI agents as "allies" when they came to his White House office on Jan. 24, 2017, four days after President Trump's inauguration.

"So they kept him relaxed and unguarded deliberately as part of their effort to set him up and frame him," Powell said.

Later, an FBI agent changed the 302, the notes taken on that FBI interview with Flynn.

Bartiromo walked Powell through the timeline:

-- August 16, 2016: The FBI opens the Crossfire Razor probe into General Flynn's contacts with the Russians.

-- August 17, 2016: An FBI agent attends a presidential-level briefing for then-candidate Donald Trump, at which Flynn also was present. (Powell noted that the FBI agent was "specifically sent into that briefing to assess and gauge General Flynn's mannerisms, to collect whatever information he could...to notice his reaction to any mention of Russia. And that was done all expressly in case they needed to interview him later, i.e., if Trump was elected and General Flynn was put in the White House.")

-- January 6, 2017: Comey is sent to brief President Trump on the salacious part of the Steele dossier involving Russian prostitutes.

According to Powell, on Jan. 4, the day before the Jan. 5 White House meeting, the FBI unmasked transcripts of Flynn's call with the Russian ambassador, and they briefed Clapper on it immediately. "Clapper then immediately went and briefed President Obama on it," Powell said:

Then they have the Oval Office meeting on the 5th. Comey admits in his testimony that the FBI are the people that unmasked General Flynn, 'our people,' whatever that means. And at the meeting on the 5th, Sally Yates was stunned because Obama mentions to her out of the blue about the call and the transcript of the call. She knew nothing about it, because Comey hadn't briefed DOJ (on Flynn's call with Russian Ambassador Kislyak).

So, then they dispatch Comey the very next morning to brief President Trump only on the salacious aspects of the dossier on January 6, to set the news hook for BuzzFeed and CNN to run with the dossier they knew was a lie.

Then Peter Strzok is watching a CNN report on that and texts about he and Priestap sitting there watching it and using it as a pretext to go interview some people. So the whole thing was orchestrated and set up within the FBI, Clapper, Brennan, and in the Oval Office meeting that day with President Obama.