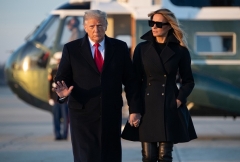 President Donald Trump and First Lady Melania Trump board Air Force One bound for their Christmas vacation in Florida. (Photo by SAUL LOEB/AFP via Getty Images)

The numbers released Friday by the Labor Department's Bureau of Labor Statistics are not as good as they have been under Donald Trump, nor are they better than they were when he took office in January 2017.

-- The labor force participation rate was 62.8 percent in January 2017, compared with 61.5 percent this past December and the same 61.5 percent in November. This number reached a Trump-era high of 63.4 percent as recently as this past February.

-- The number of Americans not in the labor force -- neither holding nor wanting a job -- was 94,466,000 when Trump took office. In December, this number had swelled to 100,663,000, partly as a result of retiring baby boomers, but also because of COVID-induced business closures and job losses.

Total nonfarm payroll employment declined by 140,000 in December -- no job gains. According to BLS, the decline in payroll employment reflects the recent increase in coronavirus cases and efforts to contain the pandemic. In December, job losses in leisure and hospitality and in private education were partially offset by gains in professional and business services, retail trade, and construction.

In December, the civilian non-institutional population in the United States was 261,230,000. That included all people 16 and older who did not live in an institution, such as a prison, nursing home or long-term care facility.

Of that civilian non-institutional population, 160,567,000 were participating in the labor force, meaning they either had a job or were actively seeking one during the last month. This resulted in a labor force participation rate of 61.5 percent in December.

For most of his term, it was a source of pride to Trump that the black and Hispanic unemployment rates fell to record lows.

In response to Friday's employment report, the Job Creators Network said small businesses "continue to suffer under draconian lockdowns by governors and mayors across the country."

The Job Creators Network is putting all elected officials on notice that small business is too big to fail. The nonpartisan group, founded by entrepreneurs, said it is launching a campaign to "Bring Small Businesses Back," and as part of that, it is urging all Americans to get the COVID vaccine when it is available. "A shot in your arm will be the shot in the arm that small businesses need to survive,” the group said.