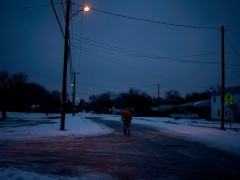 Millions of people were still without power on February 17 in Texas, the oil and gas capital of the United States. (Photo by MATTHEW BUSCH/AFP via Getty Images)

High demand forced the Electric Reliability Council of Texas (ERCOT), the state's grid operator, to shut off power to millions of customers on Feb. 15. Many of those customers are still shivering in dark homes where pipes have burst.

As of Thursday morning, President Biden had not commented publicly on the emergency, but his spokeswoman Jen Psaki did mention it on Wednesday, telling reporters:

FEMA has supplied generators to Texas and is preparing to move diesel into the state to ensure the continued availability of backup power, which of course is a major issue on the ground to key critical infrastructure including communications, hospitals, and water.

FEMA is also supplying Texas with water and blankets at their request. We are preparing to quickly process requests from other states for emergency assistance. That's how the process typically works. And we urge people in the affected states to of course listen to their emergency management officials.

Texas is not part of the National Grid, and the finger-pointing already has begun, as proponents and opponents of green energy use the rolling power outages to buttress their arguments.

According to ERCOT, "Extreme weather conditions caused many generating units – across fuel types – to trip offline and become unavailable."

On Wednesday, a reporter asked Psaki if President Biden is "willing to leave 30 million Texans off of the National Grid."

"Let me first say that building resilient and sustainable infrastructure that can withstand extreme weather in a changing climate will play an integral role in creating millions of good paying union jobs, creating a clean energy economy, and meeting the president's goal of reaching a net zero emissions feature by 2050. And also will--will be beneficial in future storms," Psaki said:

I will say that there has been some inaccurate accusations out there. I'm not sure if former Secretary Perry made these, but that it was...suggested that renewables caused failures in Texas's power grid.

And actually, numerous reports have actually shown the contrary, that it was failures in coal and natural gas that contributed to the state's power shortages. And officials at Electric Reliability Council of Texas, which operates the state's power grid, have gone so far as to say that failures in wind and solar were the least significant factors in the blackouts.

And I know, that wasn't exactly your question, but I just wanted to convey that since there's been a lot of confusion about it. Beyond that, about the power grid, I would certainly send you to the Department of Energy for any further comment on that particular line of questioning.

Another reporter asked if Texas should have better prepared itself for "climate change."

"It's a really important question," Psaki said. "I think our focus, though, right now is on providing relief to the emergency situation that we're seeing in Texas and in surrounding states. I'm sure there will be time to look back and evaluate what better preparations, if better preparation should have been done, could have been made. But at this point in time, we're just focused on getting relief to the people in the state and the surrounding states, I should say."

The emergency will last as long as the cold snap continues.

"Although we’ve reconnected more consumers back to the grid, the aggregate energy consumption of customers (those recently turned back on and those already on) is actually lower this morning compared to yesterday because it’s less cold," said ERCOT Senior Director of System Operations Dan Woodfin on Wednesday. "However, we are anticipating another cold front this evening which could increase the demand."

"The ability to restore more power is contingent on more generation coming back online," he added.

Since the winter storm began on Monday, approximately 185 generating units have tripped offline for one reason or another. Some factors include frozen wind turbines, limited gas supplies, low gas pressure and frozen instrumentation, ERCOT said.