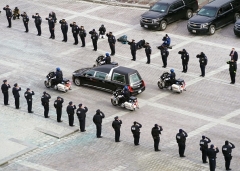 A hearse leaves the US Capitol with the cremated remains of US Capitol Police officer Brian Sicknick after lying in honor at the Capitol, on February 3, 2021. (Photo by KEVIN DIETSCH/POOL/AFP via Getty Images)

"There's been conflicting reports about his cause of death. Have you determined the exact cause of death, and is there a homicide investigation?" Grassley asked Wray, who was testifying before the Senate Judiciary Committee.

"There is an ongoing investigation into his death," Wray responded:

"I have to be careful at this stage because it's ongoing -- not to get out in front of it, but I certainly understand and respect and appreciate the keen interest in what happened to him. After all, he was here protecting all of you, and as soon as our information that we can appropriately share, we want to be able to do that, but at the moment the investigation is still ongoing."

Grassley followed up: "So does that mean since the investigation's going on, you have not determined the exact cause of the death?"

Wray responded, "That means we can't yet disclose the cause of death at this stage."

"But you have determined the cause of death?" Grassley asked.

"I didn't say that," Wray said. "We are not at a point where we can disclose or confirm the cause of death."

Grassley asked no more questions about Sicknick, who was among the Capitol Police officers responding to the storming of the U.S. Capitol on January 6. 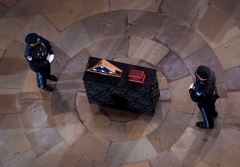 But later, Sen. Ted Cruz (R-Texas) did follow up, telling the FBI director:

"You had a conversation with Senator Grassley about the death of Officer Sicknick, and there obviously is considerable interest and concern in the Senate and across the country as to the circumstances of Officer Sicknick's death.

"There have been conflicting reports about the circumstances of his death. You told Senator Grassley the FBI at this point is not in the position to confirm a cause of death. Is there any information that the FBI can share with the American people about what we know of the circumstances surrounding his tragic death?" Cruz asked Wray, who responded:

"Although I certainly understand and appreciate the keen interest in it for all of the reasons we have discussed, at the moment, other than to say the Capitol Police has of course categorized it -- I think appropriately -- as a line of duty death, there's nothing really that I could share right now.

"Certainly, I understand why it's very much top of mind for people," Wray continued, "and I think it speaks well of the members of Congress that they are so interested in somebody who has lost his life protecting all of you. So as soon as we are in a position when the investigation has gotten to a stage where we can share information we -- we want to be able to do that."

According to a statement released by the Capitol Police on January 7:

Officer Sicknick was responding to the riots on Wednesday, January 6, 2021, at the U.S. Capitol and was injured while physically engaging with protesters. He returned to his division office and collapsed. He was taken to a local hospital where he succumbed to his injuries.  The death of Officer Sicknick will be investigated by the Metropolitan Police Department’s Homicide Branch, the USCP, and our federal partners.

The New York Times, citing unnamed law enforcement sources, initially reported that Sicknick “was struck with a fire extinguisher,” but the Times later cited a law enforcement official as saying that he did not die of blunt force trauma.

In the hours after Officer Sicknick was rushed to the hospital, officials initially said that he had been struck with a fire extinguisher. They later said that there was no evidence to support that he had died from any blunt force trauma. More recently, F.B.I. officials homed in on the potential role of an irritant as a primary factor in his death.

In its most recent statement on Sicknick's death, dated Feb. 26, the Capitol Police said:

The medical examiner’s report on Officer Brian Sicknick’s death, which followed the attack on the Capitol on January 6, is not yet complete. We are awaiting toxicology results and continue to work with other government agencies regarding the death investigation.

Officer Sicknick’s family has asked for privacy during this difficult time and that the spreading of misinformation stop regarding the cause of his death.

Sicknick's family has said it will not release any statements or give any media interviews.

In a Feb. 28 update, The New York Times reported that the "F.B.I. has pinpointed an assailant in its investigation into the death of Brian D. Sicknick."

The F.B.I. opened a homicide investigation into Officer Sicknick’s death soon after the Jan. 6 attack on the Capitol. Investigators initially struggled to determine what had happened as he fought assailants. They soon began to suspect his death was related to an irritant, like mace or bear spray, that he had inhaled during the riot. Both officers and rioters were armed with such irritants during the attack.

In a significant breakthrough in the case, investigators have now pinpointed a person seen on video of the riot who attacked several officers with bear spray, including Officer Sicknick, according to the officials. And video evidence shows that the assailant discussed attacking officers with the bear spray beforehand, one of the officials said.

While investigators narrowed potential suspects seen in video footage to a single person this week, they have yet to identify the assailant by name.

President Biden and members of Congress paid tribute to Sicknick on February 2 as his remains lay in honor in the Capitol Rotunda. Almost two months have passed since Officer Sicknick died.