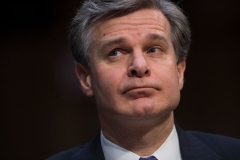 "The problem of domestic terrorism has been metastasizing across the country for a long time now, and it's not going away any time soon," Wray testified before the Senate Judiciary Committee.

So whenever we've had the chance, we've tried to emphasize that this is a top concern and remains so for the FBI. In fact -- in fact, we viewed it as such a critical threat that back in June of 2019, under my leadership, we elevated racially- and ethnically-motivated violent extremism to our highest threat priority, on the same level with ISIS and home-grown violent extremists, where it remains to this day.

Wray said the FBI has increased the number of domestic violent extremism cases on his watch, "from around a thousand or so when I got here to up to about 1,400 at the end of last year to about 2,000 now. That's domestic terrorism overall,"  he said.

Wray said with help from the American public, the FBI has arrested more than 270 people involved in the Capitol attack so far, with more suspects being identified every day.

"We're chasing down leads, we're reviewing evidence, combing through digital media to identify, investigate and arrest anyone who broke the law that day."

The people who attacked the Capitol came from a "variety of backgrounds," Wray said.

"Certainly there were quite a number -- we're seeing quite a number as we're building out the cases on the individuals we've arrested for the violence, quite a number of what we would call sort of militia violent extremists. So we've got a number self-identified with Proud Boys or the Oath Keepers, things like that.

"We also have a couple of instances where we've already identified individuals involved in criminal behavior we would put in the racially motivated violent extremist (category) who advocate for what you call white supremacy. So we've identified some of those individuals as well."

Wray refused to discuss what caused the death of Capitol Police Officer Brian Sicknick, because it's an "ongoing investigation."

"We're not at a point where we can disclose or confirm the cause of death," he said.