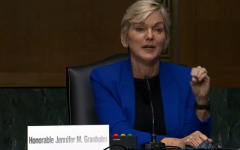 Sen. Bill Cassidy (R-La.) told Granholm that scrapping the Keystone XL pipeline will cost some 11,000 good-paying jobs, and assuming that those lost jobs are replaced with green jobs, there will be a lag time in doing that -- a lag time that means lost paychecks.

He asked Granholm to "square" that fact:

"I totally get the concern about job losses, totally," Granholm said.

"But this is why President Biden's commitment to create millions of jobs in infrastructure--" she started to say.

Cassidy interrupted, telling Granholm it is "cold comfort to know that years from now, perhaps in a different state with a different training...there'll be another job available.”

"No, I completely understand what you are saying," Granholm responded.

"What I can tell you is from my experience in Michigan is that when we focused on providing incentives for job providers to locate in Michigan in clean energy, they came. Senator Manchin and senator Stabenow have 48 C [clean energy tax credit program], which they hope will be able to be plussed-up to entice job providers into communities that have been left behind."

She said it was a "good thing" that the United States is the world's largest oil and natural gas producer: "And I look forward to working with  you to make sure that it's clean and reduces GHG emissions," she added.

Granholm also called it a "good thing" that the U.S. has among the lowest energy prices in the developed world; that jobs in oil, gas and coal pay well above the national average; that because of fracking, U.S. emissions are now at the lowest level since the early 1990s; and that fossil fuel exports to other countries make the U.S. influential suppliers in the global energy market.

All "good things," she answered.

Barrasso noted that Biden, in his first days as president, has ordered a 60-day ban on oil, gas, and coal leasing and permitting on federal lands.  Half of Wyoming is federally owned, he noted.

"I’m just curious how a long term ban is consistent with the president's goal of unifying our country and putting Americans back to work and helping our economies grow. How is that all consistent?” Barrasso asked.

Granholm responded: “I think the president's plan of building back better which would create more jobs in energy, clean energy, than the jobs that might be sacrificed. But I will say this, we don't want to see any jobs be sacrificed.”

She referred to Barrasso's comments on using technology to reduce carbon emissions from fossil fuels.

"The moratorium on public lands, I know for those states that have these jobs in abundance, this is something we're going to have to work on together to ensure that people remain employed," Granholm said.

She noted that the oil industry's 10,000 current licensees on federal lands will not be affected. "They will continue to operate."

She said the moratorium applies only to future licenses. "So it gives us some time to be able to work on creating jobs and diversifying and providing good-paying jobs in every pocket of the country."

Granholm said part of what Joe Biden has put together "is a sort of swat team inside of the federal government to focus on communities that are -- that have powered America. And to make sure that we don't leave those communities behind."