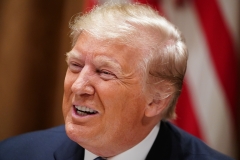 (CNSNews.com) - As America reopens, the economy is recovering from the devastating employment snapshot recorded in April and May, and while the numbers released today show improvement, they're still far from the many records set under Trump.

While that's well below the Trump-era record high of 158,803,000 set in December 2019, it is is 30,000 more than the number of Americans counted as employed when Barrack Obama took office amid a recession in January 2009.

The number of unemployed Americans dropped by 3,235,000 last month, and the nation's unemployment rate also dropped to 11.1 percent, down from 13.3 percent in May and the record 14.7 percent in April.

President Trump, at an impromptu Thursday morning news conference, hailed the 4.8 million jobs added in June, calling the "largest monthly jobs gain in the history of our country."

In June, the civilian non-institutional population in the United States was 260,204,000. That included all people 16 and older who did not live in an institution (such as a prison, nursing home or long-term care facility).

Of that civilian non-institutional population, 159,932,000 were participating in the labor force, meaning they either had a job or were actively seeking one during the last month. This resulted in a labor force participation rate of 61.5 percent, up from 60.8 percent in May, but below the Trump-era high of 63.4 percent set this past January and February.

The economy added 4.8 million jobs in June, a number recorded before some "hot-spot" states once again curbed bar and other business openings.

"Today's announcement proves that our economy is roaring back, it's coming back extremely strong," Trump said.

Fed Chair: 'We Want to Get Back to a Tight Labor Market'

What is the Federal Reserve doing to make sure the "existing inequality in this country" doesn't get any worse? Sen. Sherrod Brown (D-Ohio) asked Chairman Jerome Powell at a congressional hearing earlier this month.

“What we learned during the last long expansion is that a tight job market is probably the best single thing that the Fed can do to support gains by all low- and moderate-income communities, and particularly African Americans, who are represented in this group,” Powell replied.

So we saw in the last few years before the coronavirus arrived that wage increases were the largest for people at the low end of the income spectrum. And we also, you know, we met with  many, many groups and people in low- and moderate-income communities as part of our "Fed Listens" event, as part of our, you know, longstanding community meetings we had with people, and what we heard over and over again was, this is the best labor market we've seen in our lifetime. Please don't change what you're doing, this is -- this is really working.

And so, you know, we are all highly motivated to get back to that. Everything we're doing is trying to get the labor market back to where it was in February of 2002. We want to get back to a tight labor market. We learned that inflation did not move up really noticeably at all with almost two years of unemployment between 3-and-a-half and 4 percent. And we learned that there were tremendous benefits to those communities, but also to the country, because we were pulling people into the labor force.