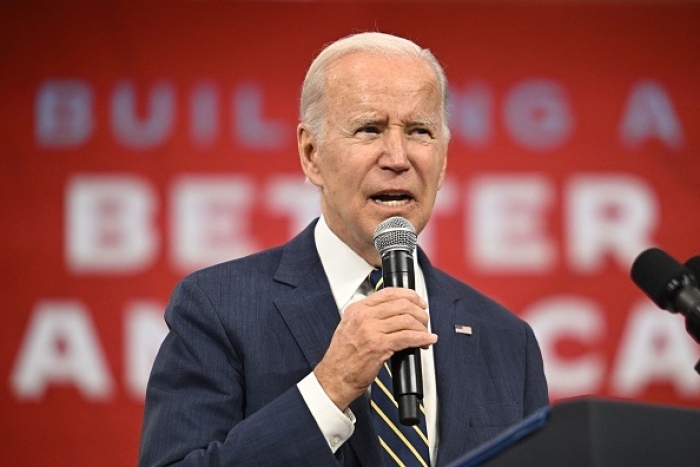 President Joe Biden speaks about the economy in Bay City, Michigan, on November 29, 2022. (Photo by JIM WATSON/AFP via Getty Images)

(CNSNews.com) - The Labor Department's Bureau of Labor Statistics said the economy added 263,000 jobs in November, higher than the anticipated 200,000; and the unemployment rate held steady at 3.7 percent.

But there are troubling trends in Friday's employment report:

Despite the rising cost of living, the number of employed Americans dropped for a second straight month, falling by 138,000 to 158,470,000; the number of Americans counted as not in the labor force -- meaning they have no job and are not looking for one -- increased by 359,000 to 100,227,000, the highest this number has been in a year; and the labor force participation rate declined for a third straight month, to 61.1 percent in November.

People who are not in the labor force are retirees, students, caregivers, and others who have dropped out.

Conversely, the participation rate is the percentage of the population that is either working or actively looking for work.

In November, the civilian non-institutional population in the United States was 264,708,000. That included all people 16 and older who did not live in an institution, such as a prison, nursing home or long-term care facility.

Of that civilian non-institutional population, 164,481,000 were participating in the labor force, meaning they were either employed or unemployed -- they either had a job or were actively looking for one during the last month. This resulted in a labor force participation rate of 62.1 percent in November -- down from 62.2 percent in October; 62.3 in September; and 62.4 percent in August, so the trend continues to be negative.

The participation rate was 61.4 percent when Joe Biden took office as the pandemic raged. Today's number, 62.1 percent, is more than a point below the Trump-era high of 63.4 percent recorded in February 2020, just before COVID-prompted shutdowns.

Notable job gains in November occurred in leisure and hospitality (+88,000), health care (+45,000), and government (+42,000). Employment declined in retail trade and in transportation and warehousing.

In a separate report issued earlier this week, BLS said the number of job openings edged down to 10.3 million on the last business day of October.

"I believe there is a path to bringing inflation down while maintaining a strong healthy labor market," Yellen said.

"We had rapid recovery [from COVID impacts]. Growth has slowed down. I expect the pace of job creation to slow down. That's natural and expected when the unemployment rate is close to the lowest in 50 years. So I think we can take the heat out of the economy," Yellen said.

She also suggested that consumer spending during the pandemic -- never mind government spending -- is responsible for inflation.

"So, we had rapid recovery from the pandemic. When President Biden was elected, unemployment was quite high. It was close to 7 percent. And we put policies in place that generated a very rapid recovery. Unemployment quickly fell back into the threes...So normally you wouldn't expect, just because you had a rapid recovery, for inflation to rise very much, if at all.

"But it turned out the pandemic had very special impacts on the economy. Remember, everybody stopped spending on services. They were in their homes for a year or more. They wanted to buy grills and office furniture. They were working from home. They suddenly started splurging on goods, buying technology, you know, suddenly working through technology. And bottlenecks started developing where supply, in particular, important sectors of the economy, just couldn't keep up with demand.

Yellen also blamed Russia's war in Ukraine for causing gas prices to rise: "It's caused food prices to spike. It's creating hardship all over the world. And we're really trying to address those -- those strains as well. That's another reason inflation went up, and we're trying to hold that down," she said.