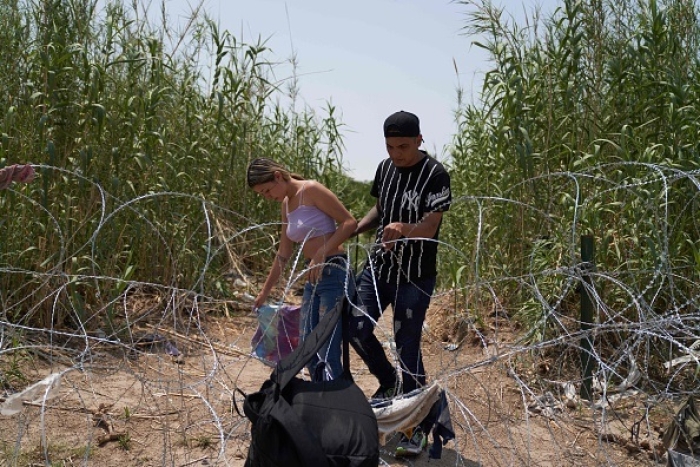 Migrants who illegally crossed the Rio Grande River climb through concertina wire in Eagle Pass, Texas, on May 22, 2022. (Photo by ALLISON DINNER/AFP via Getty Images)

(CNSNews.com) - Homeland Security Secretary Alejandro Mayorkas has approved the use of border barrier funds, not to build a border barrier or wall, but to spend on projects that will improve safety for border agents -- and illegal border crossers.

The projects in the San Diego, El Centro, Yuma, El Paso, and Rio Grande Valley Sectors will "address life, safety, environmental, or other remediation requirements in accordance with the Department’s plan for the use of border barrier funds," DHS said in a news release.

"These projects address operational impacts, as well as immediate life and safety risks, and will be funded with DHS’s Fiscal Year 2017, 2018, and 2021 appropriations. Work is estimated to begin quickly through existing contracting vehicles."

-- Replacing a dilapidated train gate with a modernized train gate in El Centro "to address current life and safety risks posed to Agents and migrants due to regular train operations."

-- Constructing retractable gates under an existing bridge across the New River in Imperial County, California "to address risks associated with the extremely hazardous river waters."

-- Constructing a train and vehicle gate in the El Paso Sector "to address current life and safety risks posed to Agents and migrants due to regular train operations."

-- Closing a gap by constructing a vertical lift gate system over the Tijuana River "to address safety concerns resulting from the polluted conditions of the river channel."

-- Closing a small gap in the Yuma Sector that remains as a result of previous border barrier construction "and poses a life and safety risk to Agents and the community."

-- Completing 17 gates and conducting site clean-up work in the Rio Grande Valley Sector "that currently makes it difficult for Border Patrol Agents to efficiently access certain areas and for first responders to respond to incidents."

"In addition, as DHS moves forward with the projects announced today, it continues to call on Congress to cancel remaining appropriations for barrier system construction and instead specifically fund smart border security measures, like border technology at and between ports of entry, that are proven to be more effective at improving safety and security at the border.

"DHS also continues to assess how to best utilize the previously appropriated barrier system funding, including whether those funds would be most effective if used in certain locations to install barrier system attributes," the news release said.