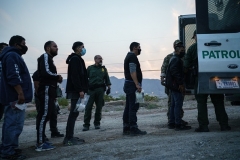 Migrants caught crossing the US-Mexico border are loaded into a transport van by US Border Patrol agents in Sunland Park, New Mexico on July 22, 2021. (Photo by PAUL RATJE/AFP via Getty Images)

(CNSNews.com) - The Biden administration is quietly moving thousands of illegal aliens to various states, including Florida, but Florida Gov. Ron DeSantis intends to return them to sender.

In his "Freedom First" $99.7 billion budget for Fiscal Year 2022-23, DeSantis included $8 million to protect Floridians from the "harms" of illegal immigration, including by transporting illegal immigrants "to other states."

At a news conference last week, DeSantis said, "If you sent [illegal immigrants] to Delaware or Martha’s Vineyard or some of these places, that border would be secure the next day.”

So the border's obviously a disaster, and some people say well, that's a problem for Texas or Arizona. Well, actually, the Biden demonstration puts people on planes and flies them into Florida in the wee hours of the morning.

So they've done over 70 flights in the last six months, dumped people here, and we had -- a few weeks ago, one of those people that Biden dumped ended up committing a murder in northeast Florida. And so these are crimes that would not have happened but for Biden's recklessness.

And so our view is, if they are going to be dumping, you know, we want to be able to facilitate transfer to places like Delaware. And so we have $8 million in my new budget to be able to do that.

But we also look to these carriers that the federal government's contracting with, and we're going to pass legislation that says if you are facilitating Biden's policies, which is effectively a mass human smuggling operation, you are not going to be eligible to do business with the State of Florida or other local governments, and we're going to charge you restitution for each individual that you're bringing, because, yes, there are drugs, there are crimes, but you also have things with health care costs, education, all these services that get taxed because of Biden's reckless policies.

And so we have a responsibility to fight back, and that's what we're doing.

Host Laura Ingraham pointed to a Washington Post op-ed accusing DeSantis of "paving his path to the White House on the backs of vulnerable migrant children."

In response, DeSantis said he wants to use Florida resources to help "American kids, Floridians."

"Let's not be a repository for people coming from all over the world illegally through the southern border and then brought to the State of Florida. So focusing on your citizens first I think is common sense, and we want it to be -- we do not want to facilitate Biden's reckless policies in any way, shape, or form.

"Their policies are wrong, and if the states band together and do things like Florida is proposing to do, it would be more likely that they're going to have to reverse course, but if you're facilitating then they're going to continue to do what they're doing."