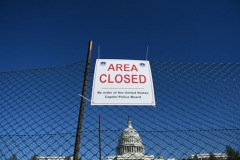 A sign of restricted times as the nation's capital prepares for the Jan. 20 presidential inauguration. (Photo by BRENDAN SMIALOWSKI/AFP via Getty Images)

(CNSNews.com) - The storming of the U.S. Capitol one week ago today is having a major impact on plans for the January 20th presidential inauguration, District of Columbia Mayor Muriel Bowser told a news conference on Wednesday.

"We have asked Americans not to come to the Washington, D.C., event but instead to participate virtually. And we know that is the right choice and the best way to keep everyone safe," she said.

Joining Bowser at the news conference, D.C. Metropolitan Police chief Robert Contee said because the inauguration has been declared a National Special Security Event, "I think you can expect to see somewhere upwards of beyond 20,000 members of the National Guard that will be here in the District of Columbia." TV reports on Wednesday morning showed some of those National Guard members sleeping on the floor of the U.S. Capitol.

Mayor Bowser said her request for a "pre-emergency declaration" for the District of Columbia has been granted by the Executive Branch. And the so-called "National Special Security Event" period, as determined by the Department of Homeland Security, begins today instead of the day before the inauguration.

Bowser also has asked the Interior Secretary to cancel all Public Gathering Permits in the District, and to deny any applications for those permits from January 11 through the 24th. Bowser said that request is pending:

"I think it's fair to say that the Secretary is very concerned about his ability to approve or disapprove certain permits. We continue to ask them to look at the public gatherings, where there are people. We encourage them to work with the presidential inauguration committee as well and also to look to the D.C. experience, because we have denied gathering permits throughout the response to COVID, and we know that we have the authority to do that because they pose a public health threat. So that conversation is ongoing."

Bower said people who live and work in the District should stay out of the downtown business area where only "essential business" may be conducted.

"Individuals entering the perimeter may be subject to screening and asked to describe their essential business, so be prepared to do that," she said.

All parking garages in the downtown "restricted" zone will be closed. And D.C. residents should expect other "impacts to transportation," including Metrorail closures and road closures.