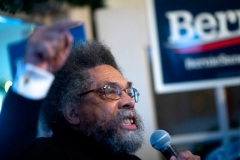 (CNSNews.com) - Asked to explain "what's going on" in this riot-riven country, Harvard Divinity School Professor and civil rights activist Cornel West told "Fox News Sunday" Chris Wallace it's a "beautiful thing" to see "caring and concerned citizens...hitting the streets" to protest the murder of George Floyd at the hands of police:

Host Chris Wallace asked West if the "riots, violence, looting" is doing any good for African-Americans:

No, most of my fellow citizens, God bless them, that are in the streets are there peaceful, who are there marching. And when it does spill over into violence, looting is wrong. But legalized looting is wrong too. Murder is wrong. Legalized murder is wrong too. I look at the wickedness at high places first and then keep track of the least of these.

We all have individual responsibility, but we're living in a system that seems to be unable to reform itself. And when you have such a moment, you get violent spillover. That's the concern.

If we're more concerned about the property and spillover than the poverty, decrepit school system, dilapidated housing, massive unemployment and under-employment, we're going to be doing this every five, every 10, every 20 years. And you and I are old enough to know, though, brother, going all the way back to the Harvard years.

I remember when you were arrested right there in front of the Cambridge Prison itself of '69. We go over and over again. We got to make sure we don't pass it on to our younger generation.

(Wallace noted that he was in Cambridge as a reporter, not a protester.)

During the interview, West invoked the "vicious legacy of white supremacy."

I think what we're seeing here is the ways in which the vicious legacy of white supremacy manifests in organized hatred, greed, and corruption. If we're dealing with moral meltdown and spiritual breakdown, and the sad thing about this moment, my dear brother Chris, is that we are witnessing the collapse of the legitimacy of leadership; the political class, the economic class, the professional class. That's the deeper crisis.

And so, the beautiful thing is we're seeing citizens who are caring and concerned. They're hitting the streets. So you kill a black brother, each life, no matter what color, precious. We're seeing black, white, red, yellow, especially young people, coming together. That's a beautiful thing.

Many decades ago that wasn't the case. But the problem is we have a system -- that's not responding and seems to be unable to respond. That's the problem my brother.

West agreed that there has been progress, "especially for the black middle class."

I'm talking about the black poor and working class -- all poor and working class. You see, brother Chris, I am a revolutionary Christian who looks at the world through the lens of the cross, not Pontius Pilate. I don't measure black progress in terms of black elites, how many black faces you have in high places. That's wonderful. That's beautiful. I'm concerned about the least of these.

And keep in mind, when -- when police kill fellow citizens, they kill white brothers and sisters too. Their lives are precious too. That's wrong too. But too many black and brown have been killed.