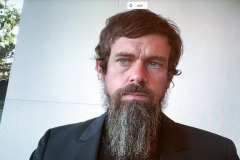 Then-Twitter CEO Jack Dorsey testifies remotely during a hearing to discuss reforming Section 230 of the Communications Decency Act on October 28, 2020 in Washington. (Photo by GREG NASH/POOL/AFP via Getty Images)

(CNSNews.com) - Before the 2020 election, Twitter executives were "clearly liaising with federal enforcement and intelligence agencies about moderation of election-related content," according to Friday's dump of the "Twitter files," as reported by Matt Taibbi.

According to the information provided by Elon Musk, Twitter executive Yoel Roth "not only met weekly with the FBI and DHS, but with the Office of the Director of National Intelligence (DNI).

In these three tweets, Taibbi describes what was going on in the weeks before the 2020 election through January 6, 2021:

--"Before J6, Twitter was a unique mix of automated, rules-based enforcement, and more subjective moderation by senior executives. As @BariWeiss reported, the firm had a vast array of tools for manipulating visibility, most all of which were thrown at Trump (and others) pre-J6."

-- "As the election approached, senior executives -- perhaps under pressure from federal agencies, with whom they met more as time progressed -- increasingly struggled with rules, and began to speak of 'vios' [violations] as pretexts to do what they’d likely have done anyway."

-- "After J6, internal Slacks [messaging] show Twitter executives getting a kick out of intensified relationships with federal agencies..."

John Ratcliffe, the former director of national intelligence, told "Sunday Morning Futures" he made it "very clear" prior to the 2020 election that the Hunter Biden laptop story was not Russian disinformation:

He also said on Sunday that his office would have been "authorized" to speak to Twitter officials only about "election security" -- and only with the approval of the Trump National Security Council. He said those "election security briefings" were given to "groups of private companies."

"So I think that's pretty clearly stated. And in looking at the Twitter files, I did look and see in Matt Taibbi's substack where he said that there were weekly meetings between the FBI and DHS and Twitter. And I know there are whistle-blowers that are saying that as well.

"But Matt Taibbi also says there was only one reference to my office and someone liaising with my office. And I assume that that -- I certainly hope that that was part of the National Security Council-approved process for election security briefings."

Bartiromo told Ratcliffe, "And you say that the DNI was not suppressing information. But the rest of the apparatus in the government was -- the FBI, the DOJ, meeting with social media to say, oh, this is likely part of the dump from Russia. So what happens now? How do you undo this abuse of power?" Bartiromo asked Ratcliffe:

"So this was -- as I said, this was a domestic disinformation campaign," Ratcliffe said:

"It involved Democrats like Adam Schiff on the House Intelligence Committee. It involved members of the media. It involved, according to FBI whistle-blowers, FBI agents. And it, of course, involved Twitter, and all of these working in concert, putting their not just thumb on the scale, but entire hand on the scale to mislead the American people in the weeks and months preceding a presidential election.

"And to this point, one of the questions I have is -- it was reported that, when I was in Congress, Twitter was shadow-banning me as a conservative Republican. Did that continue when I became the DNI and was putting out the official statement [that Hunter's laptop was not Russian disinformation]?

"As you accurately said, Maria, this whole thing was the suppression of the truth and the amplification of lies to mislead the voting public. And, to that point, that's election interference. And private companies, like -- I keep hearing that, well, Twitter's a private company, they can do what they want.

"That's not the case, Maria. Anyone, even private companies, can't engage in conduct which is fraudulent in nature, intended to interfere with the free exercise of voting rights. And private company CEOs can't go to Congress and lie under oath.

"And, very clearly, what Jack Dorsey said, and what the Twitter...files reveal, they were censoring. And he stated unequivocally that they were not. So he needs to be brought in.

The last thing, Maria, is Section 230 protection for companies like Twitter. They have civil liability protection because they're supposed to be a platform. They're not supposed to be engaging in editorializing or suppressing the truth, which is exactly what they have done. Congress needs to address that."

'These are private companies...'

Biden administration spokesman John Kirby was asked about the apparently regular meetings between Twitter executives and the FBI, Homeland Security Department, and the Director of National Intelligence on "Fox News Sunday."

Host Shannon Bream asked Kirby, "Should or shouldn't the federal government, federal agencies, in your words, be directing private companies on how to execute their initiatives?"

"We aren't directing private social media companies on how to manage their content," Kirby replied. "These are decisions that they have to make, as appropriate.

"Now, look, we, obviously, don't want to see, you know, the public square polluted with hate speech and disinformation that -- that's not -- that's not a good use of the information environment for the American people. But, it's up to these social media companies to determine how they're going to manage their content, how they are going to deliver that content to their users."

Bream followed up: "But how much pushback ability do they have if the federal government and agencies like the FBI is calling them up and saying, we don't like these specific tweets and think they should take action, and then they do, it appears?"

"Well, without speaking to that hypothetical situation, again, these are -- these are private companies," Kirby said. "And they have to make these decisions based on their own policies, their own -- their own initiatives. And we respect that," Kirby said.