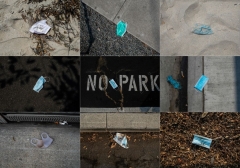 Disease-linked detritus, such as the masks seen here, has conservationists warning that the coronavirus pandemic could spark a surge in ocean pollution. (Photo by APU GOMES/AFP via Getty Images)

(CNSNews.com) - The federal Centers for Disease Control and Prevention reports 283,358 new cases of coronavirus in this county in the last seven days -- 37,417 reported yesterday -- for a total of 6,786,352 presumed or diagnosed cases since the first reported cases in February.

Yet based on death certificates submitted so far to CDC's National Center for Health Statistics, deaths involving COVID have decreased for at least five straight weeks since July 25.

The chart below shows the ups and downs of COVID-involved deaths, based on death certificate information that is constantly updated and is certain to change in the days and weeks ahead. (States register all death certificates and send them to the National Center for Health Statistics, where they are used to produce the nation’s official death statistics.)

Following the April 25 peak of 17,055 COVID-involved deaths, the number declined for ten straight weeks until the week ending July 4, when the number of deaths increased, a trend that continued for all of July.

But since the August 1 report, COVID-involved deaths have trended down. CDC notes that data for recent weeks is incomplete, because of the lag in receiving and recording death certificates. And counts from previous weeks are continually revised as more records are received and processed.

COVID-19 deaths are identified using a new ICD–10 code. When COVID-19 is reported as a cause of death, the death is coded as U07.1. This can include cases with or without laboratory confirmation. But CDC says COVID-19 should not be reported on the death certificate if it did not cause or contribute to the death.

CDC notes that provisional death counts may not match counts from other sources, such as media reports or numbers from county health departments. Counts by NCHS often track several weeks behind other data because death certificates take time to be completed; states report at different rates; and other reporting systems use different definitions or methods for counting deaths.

At a rally in Swanton, Ohio, on Monday, President Trump said the United States has "among the lowest case fatality rates of any major country in the world and the fastest economic recovery by far of any Western nation."

"Our bold and early action saved millions of lives, and our decisive economic response save tens of millions of jobs."

Trump noted his administration has cleared regulatory hurdles in the effort to develop vaccines in "record time."

Trump also mentioned that we've learned a lot about the disease since the pandemic began: