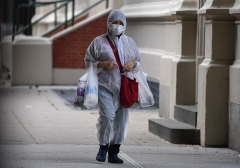 COVID-phobia: A person in a hazmat suit carries groceries on October 5, 2020 in the Brooklyn Borough of New York City. (Photo by ANGELA WEISS/AFP via Getty Images)

(CNSNews.com) - Updated numbers from the federal Centers for Disease Control and Prevention show that since mid-July, approximately one thousand people have died every day in this country from COVID-19.

That's well below the mid-April peak, when 17,063 people died in the week ending April 18.

But it's an acceleration from the six-week stretch in June and early July, when the number of weekly deaths ranged from 3,777 (week ending June 27) to 5,665 (week ending July 11).

Data for subsequent weeks is too preliminary to be reliable. The death count for the most recent seven weeks tends to increase significantly as more death certificates come in to the NCHS, so it remains to be seen whether the weekly number continues to decline from the second peak recorded on August 1.

The chart above shows the ups and downs of COVID-involved deaths, as tabulated by death certificates that receive the ICD–10 diagnostic code of U07.1. This is the nation's official COVID death count, and CDC notes the tally includes "confirmed and presumed" COVID deaths.

Florida, Pennsylvania and Michigan are battleground states in the November election.

At the other end of the scale, Wyoming has recorded the fewest COVID deaths (39). The other nine states with the  fewest deaths include Alaska (43), Vermont, Montana,  Maine, Hawaii, North Dakota, South Dakota, West Virginia, and New Hampshire (419).