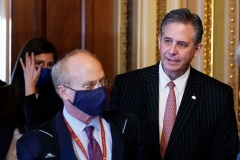 That's a switch from last month, when Cassidy agreed with a majority of Republicans that impeaching a former president would be unconstitutional.

The vote was 56-44 to proceed with the impeachment trial. Cassidy said Trump's attorneys did a "terrible job" on the constitutionality question, which was the matter at hand:

"They talked about many things, but they didn't talk about the issue at hand. And so, if I'm an impartial juror, and I'm trying to make a decision based on the facts as presented on this issue -- then the House managers did a much better job."

Cassidy made it clear that the mob attack on the Capitol was not the issue at hand on Tuesday, day one of Trump's second impeachment trial. "The issue at hand is, is it constitutional to impeach a president who's left office? And the House managers made a compelling, cogent case, and the president's team did not."

Cassidy said he took notes during the arguments, as he always does: "But at one point, I leaned over to Cruz, and I said, 'Cruz -- are they talking to the point at hand?' He goes, 'Not now.' So -- you know, because I'm thinking, maybe I'm missing something."

Cassidy said when Trump's attorneys did talk about the issue at hand, "they kind of glided over it, almost as if they were embarrassed of their arguments."

Cassidy not only spoke to reporters -- he issued the following statement explaining his "yes" vote on the constitutional jurisdiction to impeach a president who is no longer in office:

We heard arguments from both sides on the constitutionality of having a Senate trial of a president who has since left office. A sufficient amount of evidence of constitutionality exists for the Senate to proceed with the trial. This vote is not a prejudgment on the final vote to convict. If anyone disagrees with my vote and would like an explanation, I ask them to listen to the arguments presented by the House Managers and former President Trump’s lawyers. The House managers had much stronger constitutional arguments. The president’s team did not.

Underscoring Cassidy’s point, at one point in Tuesday’s proceedings, Trump attorney Bruce Castor told the Senate: “I’ll be quite frank with you. We changed what we were going to do on account that we thought that the House managers’ presentation was well done.

"And I wanted you to know that we have responses to those things.”

Castor said the “counter-arguments” would come “later on.”