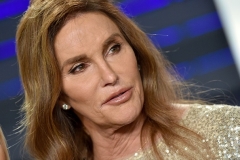 Caitlyn Jenner is running for governor of California as a fiscally conservative Republican. (Photo by Axelle/Bauer-Griffin/FilmMagic)

(CNSNews.com) - Caitlyn Jenner says she could not be running for California governor if she were still living as Bruce Jenner, the biological male who became a champion athlete, yet struggled with a secret.

Jenner, in an interview with Fox News's Sean Hannity that aired Wednesday night, described her struggle with gender dysphoria, her decision to live as a female, and her conversations with her pastor and God that changed how she’s living her life:

"And so my whole life, I struggled with this issue," Jenner said of her discomfort with living as a biological man.

But the last thing I had to do was sit down with my pastor. Because if anybody has any issues in their life that they're strug-- and everybody does. Everybody's got stuff they have to deal with.

And if they have any faith in their soul whatsoever, they sit there and they go, "God, why'd you do this? Why is this issue, for me of identity, in my head 24 hours a day, every day, 365 days out of the year?' You can't take two aspirin and get plenty of sleep and wake up the next morning and you are fine -- it's always there, but why?

And so, this question was always in my heart. I sat down with my pastor, and you know what? I thought, is there a reason for this? Am I doing the right thing? Do I need to come out and make a difference in probably the most marginalized community in the world?

After a long thought, I said, you know what? At this point in my life, my kids are raised, everybody's fine. Maybe it’s time I take care of myself. Because when that day comes and you go off to the Pearly Gates, and you are walking up the stairs, and you’re seeing God in front of you, and you just ask that question, "Did I do a good job? Did I do the right thing?" I just hope he says, "Hey, come on in.” I did a good job.

So that's what my life has been about. I'm just trying to be myself, and I can be myself now. I couldn't do it before because I had too many secrets. In my book, "Secrets of my life," I've got all my secrets out. I have no secrets anymore, and I just wake up and be myself all day.

But I still feel like I'm doing the right thing. And that's the most important thing. And I think, when I get up there, to that day, hopefully, I'm in.

Earlier in the interview, Jenner stood up for the "integrity of girls' sports," calling it "extremely important." But she told Hannity "there's more to it" than what Jenner said a few days ago.

In an interview with TMZ on Saturday, Jenner called the girls’ sports issue "a question of fairness."

But on Wednesday, Jenner said:

There's more to it than that. And I think I'm, in the future, I will explain more of that, but for me, as a trans woman, I think role models are extremely important for young people.

Trans issues -- people struggle with big time. Our suicide rate is nine times higher than the general public. And for me to be a role model for them, to be out there, I am running for governor of the state of California. Who would have ever thunk that? We've never even had a woman governor…

...I want to be a role model, and to be a leader. And I think the most important thing as a leader that you can do is your compassion, your honesty, and I think that sometimes it's very lacking in politics. So, I want to be an example to all people, not just trans people, but this is what you can do.

Jenner said the question of girls' sports "is a good question. We can deal with it. There's more problems here in the state of California than that.”