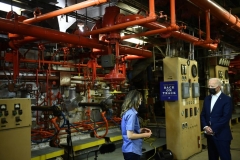 A sign reading "Getting America Back on Track" is seen on machinery as President Joe Biden tours a New Orleans water treatment plant on May 6, 2021. (Photo by BRENDAN SMIALOWSKI/AFP via Getty Images)

But at the same time, the unemployment rate ticked up a tenth of a point to 5.9 percent, the U.S. Bureau of Labor Statistics reported today.

(Note: Total nonfarm payroll employment is the number of paid U.S. workers in all businesses, excluding proprietors, private household employees, unpaid volunteers, farm employees and the unincorporated self-employed. It includes about 80 percent of those who contribute to GDP and who are covered by unemployment insurance.)

This produced the higher unemployment rate.

Among the unemployed, the number of job leavers -- unemployed persons who quit or voluntarily left their previous job and began looking for new employment -- increased by 164,000 to 942,000 in June.

In June, the civilian non-institutional population in the United States was 261,338,000. That included all people 16 and older who did not live in an institution, such as a prison, nursing home or long-term care facility.

Of that civilian non-institutional population, 161,086,000 were participating in the labor force, meaning they either had a job or were actively seeking one during the last month. This resulted in a labor force participation rate of 61.6 percent in June, exactly where it was in May. This important measure has changed very little since Joe Biden took office in January 2021. It reached a high of 63.4 percent during Trump's presidency.

The number of Americans counted as not in the labor force -- meaning they didn't have a job and were not looking for one -- showed no significant change in June, dropping to 100,253,000 from 100,275,000 in May. This number includes retirees and other people who do not have a job and do not want one.

In June, 6.2 million persons reported that they had been unable to work because their employer closed or lost business due to the pandemic--that is, they did not work at all or worked fewer hours at some point in the last 4 weeks due to the pandemic. This measure is down from 7.9 million in May. Among those who reported in June that they were unable to work because of pandemic-related closures or lost business, 10.0 percent received at least some pay from their employer for the hours not worked, little changed from the previous month.

Average hourly earnings for all employees on private nonfarm payrolls rose by 10 cents to $30.40 in June, following increases in May and April (+13 cents and +20 cents, respectively).

In his testimony before Congress on June 22, Federal Reserve Chairman Jerome Powell said the economy has shown "sustained improvement," but that "much of this rapid growth reflects the continued bounce back in activity from depressed levels."

Powell said the labor market also continues to improve, "although the pace has been uneven," and that proves true in the June report.

He said the May unemployment rate of 5.8 percent remained "elevated" -- and the 5.8 percent "understates the shortfall in employment, particularly as participation in the labor market has not moved up from the low rates that have prevailed for most of the past year.”

That also applies to the 5.9 percent unemployment rate and the stagnant 61.6 percent labor force participation rate reported on Friday.

Powell said he expects job gains to pick up in coming months as vaccinations rise, "easing some of the pandemic-related factors currently weighing them down."