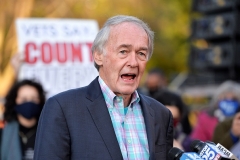 Sen. Ed Markey (D-Mass.) speaks at a protest against President Donald Trump's decision to contest the election results in Boston, Massachusetts on November 4, 2020. (Photo by JOSEPH PREZIOSO/AFP via Getty Images)

(CNSNews.com) - "Yes, absolutely," the Biden Administration is going to appoint an LGBTI envoy and consider raising the position to an ambassadorial level, incoming Secretary of State Antony Blinken told his Senate confirmation hearing on Tuesday.

The administration also will ensure that U.S. embassies may once again fly the gay pride flag.

Markey: As you know, the Trump administration rolled back much of the United States previous efforts to support and promote LGBTI ["I" stands for "intersex"] rights around the world, and I am thrilled that you and President-elect Biden have indicated that you are going to support and appoint a new special envoy for human rights and LGBTI people, a position that I have been pushing to make permanent through like international Human Rights Defense Act, which was left vacant in the Trump years.

After four years of Trump administration efforts to specifically marginalize, minimize, do damage to the rights of the LGBTI people, I think it's going to be vital to appoint a seasoned expert on those issues.

Are you going to move forward towards a speedy appointment towards an LGBTI Envoy, and would you consider raising it to ambassadorial level?

Blinken: The answer to both questions is yes, absolutely. This is a matter I think of some real urgency. We have seen violence directed against LGBTI people around the world increase. We have seen, I believe, the highest number of murders of transgender people, particularly women of color, that we have seen ever, and so I think the United States playing the role that it should be playing in standing up for and defending the rights of LGBTQI people is something that the department is going to take on and take on immediately.

Markey: Thank you. And will you repudiate the findings of the report of the Commission on Unalienable Rights and reaffirm the United States' acceptance and adherence to the human rights laid out in the Universal Declaration of Human Rights, and will you ensure that ambassadors are able to fly the gay pride parade--flag at our embassies once again around the world?

Blinken: Yes to both.