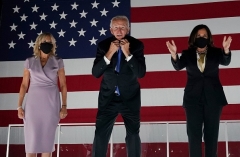 Democrat presidential nominee Joe Biden briefly removes his mask as he greets supporters alonh with his wife Jill and running mate Sen. Kamala Harris at the conclusion of the Democrat National Convention on August 20, 2020. (Photo by OLIVIER DOULIERY/AFP via Getty Images)

Biden admitted that as president, he cannot institute a national mask mandate. But he said he would lean on state and local officials:

I will make it clear what is needed to be done. I cannot mandate people wearing masks, but we've just been told, if there really -- should expect another 215,000 dead by January. But if we wore a mask, we'd save 100,000 of those lives, doing nothing but that.

We have to make sure we lay out to the American people the truth, tell them the truth. And those -- I would make sure that I would call every governor in the country into the White House, say you should be putting mandates out. And if they don't, I 'd call the mayors in their towns and their cities and say put out mandates. You can save lives.

And we should be providing for the PPE, the protective gear, that is needed.

Host Anderson Cooper asked Biden to explain the difference between President Trump's rallies, which he has called irresponsible, and "peaceful protesting," which Biden has praised.

"I think COVID safety is a problem no matter where people are wearing masks, if they don't have masks on," Biden replied.

"The context of praising people who protest peacefully is, there was a lot of question of a right to speak. Not to loot, not to burn, not to do anything that causes damage. The right to speak out makes sense.

But we should be careful across the board -- across the board -- in terms-- but there is a big difference between people walking, moving along, and people sitting down, cheek to jowl, shoulder to shoulder, a thousand of them, breathing on one another, indoors and out, that causes real serious problems.