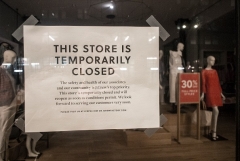 We have to open up, Trump said. We may have to shut down, Biden said. (Photo by Bill Tompkins/AFP via Getty Images)

(CNSNews.com) - Democrat presidential nominee Joe Biden, asked how he would deal with coronavirus at Thursday's final debate, refused to rule out additional shutdowns.

I’m not shutting down today, but there are-- Look, you need standards. The standard is, if you have a reproduction rate in a community that’s above a certain level, everybody says, slow up. More social distancing. Do not open bars and do not open gymnasiums. Do not open until you get this under control, under more control.

But when you do open, give the people the capacity to be able to open and have the capacity to do it safely. For example, schools. Schools, they need a lot of money to be open. They need to deal with ventilation systems. They need to deal with smaller classes, more teachers, more pods, and he’s refused to support that money, or at least up to now.

Trump noted that "99 percent of people recover" from COVID, including him:

"I say, we’re learning to live with it. We have no choice. We can’t lock ourselves up in a basement like Joe does. He has the ability to lock himself up. I don’t know. He’s obviously made a lot of money someplace, but he has this thing about living in a basement. People can’t do that. By the way I as the president couldn’t do that. I’d love to put myself in the basement or in a beautiful room in the White House and go away for a year and a half until it disappears. I can’t do that."

Trump said he wants to open the schools:

The transmittal rate to the teachers is very small. But I want to open the schools. We have to open our country. We’re not going to have a country. You can’t do this. We can’t keep this country closed.

This is a massive country with a massive economy. People are losing their jobs. They’re committing suicide. There’s depression, alcohol, drugs at a level that nobody’s ever seen before. There’s abuse, tremendous abuse. We have to open our country.

I’ve said it often, the cure cannot be worse than the problem itself, and that’s what’s happening. And he wants to close down. He’ll close down the country if one person in our massive bureaucracy says we should close it down.

"You need to be able to, for example, if you’re going to open a business, have social distancing within the business. You need to have, if you have a restaurant, you need to have plexiglass dividers so people cannot infect one another.

Trump followed up by noting that people are fleeing New York City, turning it into a "ghost town" where restaurants and businesses are dying.

"Putting up plexiglass is unbelievably expensive, and it’s not the answer," Trump said. "I mean, you’re going to sit there in a cubicle wrapped around with plastic? These are businesses that are dying, Joe. You can’t do that to people. You just can’t. Take a look at New York and what’s happened to my wonderful city. For so many years, I loved it. It was vibrant. It’s dying. Everyone’s leaving New York."