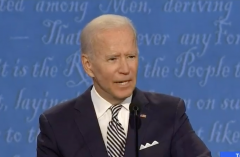 (CNSNews.com) - Asked if he would support Democrat calls to end the Senate filibuster and add more justices to the U.S. Supreme Court, Joe Biden refused to answer at Tuesday's debate in Cleveland.

"Whatever position I take on that, that’ll become the issue," Biden said.

And when debate moderator Chris Wallace didn't press Biden to answer the simple question, President Trump did: "Are you going to pack the court?" Trump asked Biden several times, forcing Biden to admit, "I'm not going to answer the question."

Here's how that contentious exchange went, as Biden ended up telling Trump to "shut up."

If Senate Republicans go ahead and confirm Justice Barrett, there has been talk about ending the filibuster or even packing the court, adding to the nine justices there. You call this a distraction by the President. But, in fact, it wasn’t brought up by the President. It was brought up by some of your Democratic colleagues in the Congress.

So my question to you is, you have refused in the past to talk about it, are you willing to tell the American tonight whether or not you will support either ending the filibuster or packing the court?

Whatever position I take on that, that’ll become the issue. The issue is, the American people should speak. You should go out and vote. You’re voting now. Vote and let your Senators know strongly how you feel.

Trump interrupted: "Are you going to pack the court?" he asked Biden, who continued urging Americans to "vote now."

"Are you going to pack the court?" Trump interrupted again.

Biden, plowing ahead, said, "Make sure you, in fact, let people know -- your senators."

"He doesn't want to answer the question," Trump interrupted.

Trump again: "Why wouldn’t you answer that question? You want to put a lot of new Supreme Court justices. Radical left."

Chris Wallace finally intervened, but not to get Biden to answer his question: "Gentlemen, I think we’ve ended this--" Wallace started to say.

("This is so unpresidential," Biden said, while Trump said, "He’s going to pack the court. He's not going to give a list.")

Wallace spoke over them: "We have ended the segment. We’re going to move on to the second segment."

"They sure do," Biden said.

"All right," said Wallace. "The second subject is COVID-19, which is an awfully serious subject...."