Biden Wants You to Know: 'It's Not a Joke' 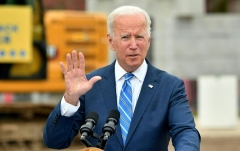 Biden was in Michigan to plug his $1.5-trillion infrastructure bill and $3.5-trillion reconciliation bill.

During his 34-minute speech, Biden used his "not a joke" phrase six times, as follows -- not that anyone thought he was joking.

-- "I'll bet everyone in this room can tell me what the most dangerous intersection in this town or any town they live in and where it is. That you hold your breath when you're driving over, trying to cross the street. Not a joke."

-- "All told, this project will save literally hundreds of millions of barrels of oil on a yearly basis. It's not a joke."

-- Let me close with this. The world is watching, not a joke. The autocrats of the world believe the world is moving so rapidly that democracies can't generate consensus quickly enough to bring their people together to get things done.

-- "They think democracy is -- not a joke. My meetings with Putin, my meetings with Xi Jinping, and other leaders. They truly believe that we can't compete in the 21st century because things are moving so fast, democracies take so much time, that they are so divided that they can't get together in time to act.

-- "They believe they'll win, they'll win the day, and they can dictate their way forward and leave us behind. They're betting, not a joke. They're betting for the first time we won't respond to this inflection point in history and we'll fail to rise to the occasion."

Biden, who was greeted by hundreds of protesters on the ride from the airport, insisted that his physical infrastructure bill and his much larger social agenda bill are not divisive:

"I'll talk about both these bills in just a moment. But first, I want to set one thing straight," Biden said:

This isn't about two pieces of legislation. It's about an inflection point, I mentioned earlier, we have in our history, the world's history. So, here's what I'm proposing...