Biden on Ukraine Invasion: ‘I Will Not Pretend This Will Be Painless. There Could Be Impact on Our Energy Prices’ 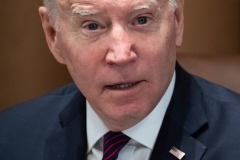 (CNSNews.com) – President Joe Biden sent a warning to Americans on Tuesday, telling them a Russian invasion of Ukraine over there will affect Americans here.

“I will not pretend this will be painless,” Biden said in a Tuesday afternoon speech from the White House:

"There could be impact on our energy prices, so we are taking active steps to alleviate the pressure on our own energy markets and offset rising prices.

"We’re coordinating with major enersy [sic] — energy consumers and producers.  We’re prepared to deploy all the tools and authority at our disposal to provide relief at the gas pump.

"And I will work with Congress on additional measures to help protect consumers and address the impact of prices at the pump."

In his push for green energy, Biden has targeted fossil fuels, signing executive orders pausing oil and gas leasing on federal lands and scrapping the Keystone pipeline as soon as he took office.

Between January 2021 and January 2022 -- President Joe Biden’s first year in office -- the price of unleaded gasoline increased 40.8 percent, according to the Bureau of Labor Statistics.

Even before the concerns about Russia invading Ukraine, the Biden administration had to acknowledge Americans’ concerns with rising energy prices.

During a CNN town hall in October 2021, Anderson Cooper asked Biden, “Do you have a timeline for gas prices, when you think they may start coming down.”

"My guess is, you'll start to see gas prices come down as we get by going into the winter -- I mean, excuse me, into next year, 2022," Biden responded. “I don't see anything that's going to happen in the meantime that's going to significantly reduce gas prices,” he added, indicating he had no particular plan.

“But the answer ultimately is -- ultimately meaning the next three or four years -- is investing in renewable energy,” Biden said.

A month later, Biden announced what he called “the largest-ever release from the U.S. Strategic Petroleum Reserve to help provide the supply we need as we recover from this pandemic." He said "other nations" would do likewise.

"This coordinated action will help us deal with the lack of supply, which in turn helps ease prices," Biden continued. "The bottom line: Today, we’re launching a major effort to moderate the price of oil — an effort that will span the globe in its reach and, ultimately, reach your corner gas station, God willing."

Biden said the price drop would “take time, but before long, you should see the price of gas drop where you fill up your tank.  And in the longer term, we will reduce our reliance on oil as we shift to clean energy.

“But right now, I will do what needs to be done to reduce the price you pay at the pump — from the middle-class and working families that are spending much too much, and it’s a strain.  And they’re -– you’re the reason I was sent here: to look out for you,” Biden said.

On Tuesday, Biden concluded his remarks on Ukraine by saying the United States is “not seeking direct confrontation with Russia, though I have been clear that if Russia targets Americans in Ukraine, we will respond forcefully.

"And if Russia attacks the United States or our Allies through asymmetric means, like disruptive cyber-attacks against our companies or critical infrastructure, we are prepared to respond.

"We’re moving in lockstep with our NATO Allies and partners to deepen our collective defense against threats in cyberspace.

"Two paths are still open.  For the sake of the historic responsibility Russia and the United States share for global stability, for the sake of our common future — to choose diplomacy.

"But let there be no doubt: If Russia commits this breach by invading Ukraine, responsible nations around the world will not hesitate to respond.

"If we do not stand for freedom where it is at risk today, we’ll surely pay a steeper price tomorrow. Thank you.  I’ll keep you informed."

He turned away without taking a single question.

Biden: 'I'm Going to Work Like the Devil to Bring Gas Prices Down'

Biden’s Energy Sec. Granholm Calls It ‘Hilarious’ That She Would Have a ‘Plan to Increase Oil Production in America’