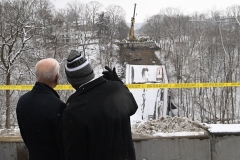 (CNSNews.com) - Even with a teleprompter to read from, President Biden sometimes can't get it right.

Speaking in Pittsburgh on Friday, Biden began by mentioning the collapse of the city's Forbes Avenue Bridge over Fern Hollow Creek. Four vehicles plunged off the road, injuring ten people.

"Before I begin, let me just talk a little bit about what we all just saw — many of us saw this morning," Biden said.

A bridge more than 50 years old — a hundred — I think it 150 years; it says “50 years old,” but I thought it was older — collapsed right here in Pittsburgh. It had been rated in “poor” condition for the past 10 years.

What you all know — if you don’t, you should know — there are another 3,300 bridges here in Pennsylvania, some of which are just as old and just as decrepit — decrepit condition as that bridge was, including here in Pittsburgh, the “City of Bridges.”

But across the country, there are 45,000 bridges in “poor” condition. It’s just simply unacceptable. That’s why your governor, and your members of Congress, your mayor have been saying for years that we have to do something about this.

Biden said the collapsed bridge "along with thousands of others bridges in Pennsylvania and across the country" will be rebuilt.

The scope of the problem is enormous.

The 447-foot-long Forbes Avenue Bridge, built in 1970 of rigid steel construction, was rated in overall 'poor' condition by the Pennsylvania Department of Transportation.