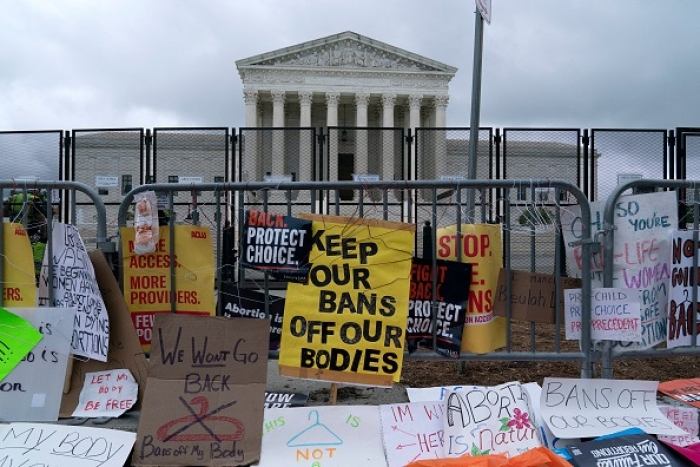 Banners and protest signs line a security fence outside of the US Supreme Court. (Photo by JOSE LUIS MAGANA/AFP via Getty Images)

(CNSNews.com) - If the U.S. Supreme Court overturns Roe v. Wade, as a leaked document suggests it will, "it's going to cause a mini-revolution," President Joe Biden told "Jimmy Kimmel Live" on Wednesday night.

"You know, I think if the court overrules Roe V. Wade...if that occurs, I think we have to legislate it. We have to make sure we pass legislation making it a law, that is, the federal government says, this is how it works."

"I mean, it's just ridiculous, in my view," Biden said. "And I don't think the country will stand for it.

“But I think what we're going to have to do, there's some executive orders I could employ. We believe, we're looking at that right now. But I want to keep--" (the audience applauded.)

"It's clear that if, in fact, the decision comes down the way it does and these states impose the limitations they're talking about, it's going to cause a mini-revolution. They're going to vote a lot of these folks out of office.

“We've got to keep it focused on -- if they overrule Roe V. Wade, California won't do it, but other states say that you cannot do the following, it's the law, you can't cross the border, all the things that some states have.

"You've got to make sure that you vote. You've got so vote. Let people know exactly what the devil you think."