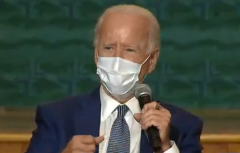 (CNSNews.com) - Speaking through a mask to a mostly empty room in Kenosha, Wisconsin on Thursday, Democrat presidential candidate Joe Biden concluded his unscripted remarks by saying, "I'm going to go down fighting for racial equality, equity across the board."

Here are Biden's remarks in context:

You gotta step up. We gotta to do a lot more. A lot more than we've done. Because this is the first chance we've had in a generation, in my view, to deal and cut another slice off institutional racism toward getting to the place where it changes.

And by the way, the main reason why I’m optimistic, because your generation -- black, white, Hispanic an Asian-American -- did you ever think you'd turn on a TV...and roughly two out of three ads would be biracial couples selling a product? That never would've happened in the 50s, 60s, 70s, 80s, 90s.

Those of us who are a lot older, we gotta join -- join them and do it now.

'We hold these truths to be self-evident that all men and women are created equal, endowed by their Creator.' Well, that may be what your birthright was -- but it's very different than actually being treated equally. Being treated the same. Everything from black mortality rates in pregnancy straight through to educational opportunities and everything in between.

One of the events hosts, Tim Mahone, thanked Biden for his "truly unifying words in a community that needs healing." "We'll go down fighting with you," Mahone told Biden.

"We're not going to go down," Biden called from the sidelines.