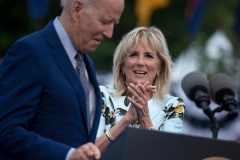 (CNSNews.com) - "Do you hear them honking their horns for you, Joe?" First Lady Jill Biden asked her husband, as she introduced him at a drive-in rally in Duluth, Georgia on Thursday.

Mrs. Biden talked about her husband's "fortitude," "charm" and "good humor," and how she always believed "that he would be the president we need."

"Joe is a man for this moment, and with his leadership, we are rising. I couldn't be more proud of what he has done in just 100 days, or more hopeful of what we are going to do next. Please help me in welcoming my husband, the president of the United States, Joe Biden!" Mrs. Biden said.

After saying hello to the crowd, Joe veered into an (unscripted) wife joke:

"Well, I'm ready to go home, because she never says that to me at home. I was--this was worth the trip, hearing that. I am Jill's husband. It's obvious to everybody. I never get introduced as 'she's my wife.' I'm her husband. And, you know, I'm proud to be..."

Shortly after he started speaking, Biden was interrupted by -- and distracted by -- protesters screaming, "End detention now! Abolish private detention centers!" He tried to mollify them by agreeing with the need to get rid of private prisons.

Once it got underway, Biden's speech centered on his multi-trillion dollar plans to grow government through his American Jobs Plan and its sequel, the American Families Plan, both of which are loaded with Democrat priorities and freebies for the people.

But Biden also wanted to thank the people of Georgia for electing two Democrats to the U.S. Senate:

"So, if you ever wonder if elections make a difference, just remember what you did here in Georgia when you elected Ossoff and Warnock. You began to change the environment. And look, because of you, we passed one of the most consequential rescue bills in American history."

Biden told the Georgia horn-honkers, "You changed America. You began to change America. And you're helping us prove that democracy, democracy can still deliver for the people. Look, I want to thank you for all of that. All of America wants to thank you because here's what we mean by delivering for the people..."

Biden then launched into a recitation of his jobs program, his intention to halve child poverty through new tax credits and social programs, his climate change agenda, and his intention to raise taxes on the rich for the benefit of the poor -- and so much more.

Biden made the same points he outlined in Wednesday night's speech to a sparsely populated, well-masked, joint session of Congress.