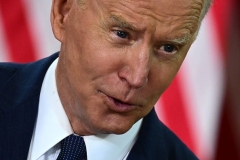 (CNSNews.com) - "I'm a union guy," President Joe Biden told a gathering in Pittsburgh on Wednesday as he prepared to announce phase one of his $2.5-trillion infrastructure plan, part of which would weaken right-to-work laws in 27 states. Those laws bar compulsory membership in labor unions.

"I support unions. Unions built the middle class. It's about time they start to get a piece of the action," Biden said.

He said it will "ensure free and fair choice" for workers to organize and bargain collectively," provisions found in the Democrats' "Protecting the Right to Organize Act," or PRO Act, which the House has passed and is now included in Biden's Jobs plan.

Biden's plan to rebuild the middle class goes beyond roads, bridges and ports. It includes expanding home-based care, retrofitting buildings, replacing all lead pipes, and scrapping "exclusionary" state and local zoning laws. Yet Biden compared it to the building of the interstate highway system in the 1950s:

It's not a plan the tinkers around the edges. It's a once in a generation investment in America, unlike anything we've seen or done since we built the interstate highway system and the space race decades ago. In fact, it's the largest American jobs investment since World War II. Create millions of jobs, good-paying jobs that'll grow the economy, make us more competitive around the world, promote our national security interests, and put us in a position to win the global competition with China in the upcoming years.

Biden highlighted the following elements of his plan, as noted in his own words:

-- "The American Jobs Plan will modernize 20,000 miles of highways and roads and main streets that are in difficult, difficult shape right now. It'll fix the nation's 10 most economically significant bridges in America that require replacement...We'll also repair 10,000 bridges, desperately needed upgrades to unclog traffic, keep people safe, and connect our cities, towns, and tribes across the country."

-- "The American Jobs Plan will build new railcars and transit lines, easing congestion, cutting pollution, slashing commute time, and opening up investment in communities that be--can connect it to the cities and cities to the outskirts where a lot of jobs are these days. It will reduce the bottlenecks of commerce at our ports and our airports.

-- "The American Jobs Plan will lead to a transformational progress in our effort to tackle climate change...building a nation-eyed-- wide network of 500,000 charging stations, creating good-paying jobs by leading the world in the manufacturing and export of clean electric cars and trucks. We're going to provide tax incentives and point-of-sale rebates--rebates to help all American families afford clean vehicles of the future."

-- "When we make all of these investments, we're going to make sure ... that we buy American.

-- "The American Jobs Plan will put plumbers and pipefitters to work replacing 100 percent of the nation's lead pipes and service lines so every American, every child can turn on a faucet or a fountain and drink clean water." (Biden said up to 10 million homes in the U.S. and more than 400,000 schools/childcare centers have lead pipes.)

-- "My American Jobs Plan will put hundreds of thousands of people to work...line workers, electricians, and laborers laying thousands of miles of transmission line, building a modern, resilient, and fully clean grid, and capping hundreds of thousands of literally orphan oil and gas wells that need to be cleaned up because they're abandoned, paying the same exact rate that a union man or woman would get having done that well in the first place.

-- "American Jobs Plan's gonna help in big ways. It's gonna extend access to quality, affordable home and community-based care. ...For too long, caregivers who are disproportionately women and women of color and immigrants have been unseen, underpaid, and undervalued. This plan along with the American Families Plan changes that, with better wages, benefits, and opportunities for millions of people who'll be able to get to work in an economy that works for them."

-- "American Jobs Plan is the biggest increase in our federal non-defense research and development spending on record. It's gonna boost America's innovative edge in markets where global leadership is up for grabs. Markets like battery technology, biotechnology, computer chips, clean energy, the competition with China in particular."

(Biden did not mention this, but a White House fact sheet notes that his plan would "Eliminate exclusionary zoning and harmful land use policies." According to the fact sheet: "For decades, exclusionary zoning laws – like minimum lot sizes, mandatory parking requirements, and prohibitions on multifamily housing – have inflated housing and construction costs and locked families out of areas with more opportunities. President Biden is calling on Congress to enact an innovative, new competitive grant program that awards flexible and attractive funding to jurisdictions that take concrete steps to eliminate such needless barriers to producing affordable housing.")

Biden urged Americans "think about" what his physical and social infrastructure plan means to "you and your loved ones." "We just have to imagine again," he said.

"Imagine what we can do, what's within our reach if we modernize those highways. You can your family could travel coast to coast without a single tank of gas onboard a high-speed train. We can connect high-speed, affordable, reliable Internet wherever you live. Imagine knowing that you are handing your children and grandchildren a country that will lead the world in producing clean energy technology..."

"So how do we pay for it?" Biden asked. He wants to raise the corporate tax rate to 28 percent, up from the current 21 percent. "Just doing that one thing will generate one trillion dollars in additional revenue over 15 years," Biden said.

"We're going to also eliminate deductions by corporations for offshoring jobs and shifting assets overseas. You do that, you pay a penalty...And use the savings from that to give companies tax credits to locate manufacturing here and manufacturing and production here in the United States. And we'll significantly ramp up the IRS enforcement against corporations who either failed to report their incomes or under report. It's estimated that could raise hundreds of billions of dollars.

"All this adds up to more than what I proposed to spend in just 15 years."

Biden repeated his promise not to raise taxes on "people making less than $400,000."

He also said he's "open to other ideas, so long as they do not impose any tax increase on people making less than $400,000."

Biden ended with a plea for bipartisanship:

"Let me close with this. Historically, infrastructure had been a bipartisan undertaking, many times led by Republicans. It was Abraham Lincoln who built the Transcontinental Railroad. Dwight Eisenhower, Republican, Interstate Highway System. I could go on. And I don't think you'll find a Republican today in the House or Senate, maybe I'm wrong, gentlemen, who doesn't think we have to improve our infrastructure?

"They know China and other countries have eaten our lunch. So there's no reason why it can't be bipartisan again. The divisions of the moment shouldn't stop us from doing the right thing for the future. I'm going to bring Republicans into the Oval Office, listen to them, what they have to say, and be open to other ideas. We'll have a good faith negotiation with any Republican wants to help get this done. But we have to get it done," Biden insisted.