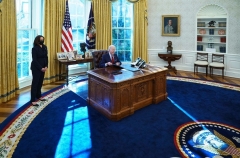 (CNSNews.com) - President Joe Biden and First Lady Jill Biden moved into the White House almost four weeks ago. So, "What's it like? How is it different?" CNN's Anderson Cooper asked the president at a town hall in Wisconsin Tuesday night.

"I get up in the morning and look at Jill and say, 'Where the hell are we?'" Biden joked.

Later, in a more serious tone, Biden said, "I literally pray that I have the capacity to do for the country what you all deserve need be done." (See below.)

Biden noted that he's been president for only four weeks:

And, sometimes, because things are moving so fast, not because of a burden, it feels like four years. It's not because of the burden. It's because there's so much happening that you focus on, you're constantly focusing on one problem or opportunity, one right after -- ad seriatim.

But what happens is that it's -- what I didn't realize, I had been in the Oval Office a hundred times as vice president or more -- more than that, every morning for the initial meetings. But I had never been up in the residence.

And one of the things -- I don't know about you all, but I was raised in a way that you didn't look for anybody to wait on you. And it's -- we're -- I find myself extremely self-conscious. There are wonderful people that work at the White House. But someone is standing there and making sure I -- hands me my suit coat, or--

Anderson Cooper, surprised, interjected: "You had never been in the residence of the White House?" Biden was vice president for eight years.

"I had only been upstairs in the Yellow Room, the Oval upstairs," Biden said.

Then, putting an end to that conversation, Biden continued down the path of praising the "wonderful people who work at the White House."

"No, and -- but it's -- but, look, the people down there are wonderful. And I find that, like my dad -- you have heard me say this before. My dad used to say, everybody, everybody is entitled to be treated with respect. And it's interesting how decent and incredible these folks are."

Cooper tried again with the softball question, asking Biden if life in the White House is "different than you expected it to be in some way?'

"You know, I don't know what I ever expected it to be," Biden said:

It is different, in that -- get in trouble here. I said when I was running I wanted to be president not to live in the White House, but to be able to make the decisions about the future of the country.

And so living in the White House, as you have heard other presidents who have been extremely flattered to live there, has -- it's a little like a gilded cage, in terms of being able to -- but walk outside and do things.

The vice president's residence is totally different. You're on 80 acres overlooking the rest of the city. And you can walk out. There's a swimming pool. You can walk off the porch in the summer and jump in a pool and go into work. You can ride a bicycle around and never leave the property and work out.

You can -- and -- but the White House is very different. And I feel a sense of -- I must tell you, a sense of history about it.

Jon Meacham, who you know, and several other presidential historians helped me with my -- I asked my brother, who's good at this, to set up the Oval Office for me, because it all happens within two hours, you know, literally. They move everything out and move something -- and it was interesting to hear these historians talk about what other presidents have gone through and the moments, and who are the people who stepped up to the ball and who are the people who didn't?

And what you realize is, the most consequential thing, for me, is, although I have known this watching seven presidents who I got to know fairly well, is, I always in the past looked at the presidency in the terms of Abraham Lincoln and Franklin Roosevelt and George Washington, and how can -- like they're superhuman.

But I had to remind myself that the really fine men that I knew well, the last seven presidents, and at least there are people who I knew well enough to know that I could play on the same team with.

So, it took away the sense of, this is -- my God, I'm not Abraham Lincoln. I'm not Franklin Roosevelt. How do I deal with these problems?

Biden said being president is "the greatest honor, I think, an American can be given, from my perspective. And I literally pray that I have the capacity to do for the country what you all deserve need be done."