(CNSNews.com) - "There will be consequences," promised President Biden on Friday, as he put his own spin on the "chaos" at the overrun southwest border he has never visited.

He was talking about a few horse-mounted Border Patrol agents trying to prevent a group of Haitians from entering the country illegally.

Biden did not send the message that foreigners should not come here illegally; and he did not address criticism that his administration is releasing thousands of these people into the country, thus encouraging more and more people to come here illegally.

The only "chaos" Biden mentioned was the videotaped horse patrol.

A reporter noted that Biden campaigned on a promise to "restore the moral standing of the U.S." and "end Trump's assault on the dignity of immigrant communities," as the reporter phrased it.

"Given what we saw at the border this week, have you failed in that promise? And this is happening under your watch. Do you take responsibility for the chaos that's unfolding?" she asked the president.

The video showed Border Patrol agents on horses, using their reins to steer the animals as they tried to hold back Haitians hoping to reach a makeshift camp under a bridge in Del Rio. 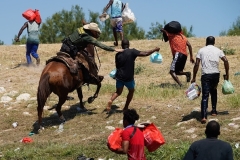 Some 15,000 people ended up in that squalid makeshift camp, which by Friday was nearly empty. The Homeland Security Secretary says 1,400 of the Haitians have been deported. He couldn't say how many have been released, but he estimated 10 to 15 percent in a Thursday evening interview with CNN.

The investigation into this particular use of horses has just begun. But that didn't stop Biden, who prejudged the outcome on Friday.

A growing number of people in both parties say what's "dangerous" and "wrong," to use the president’s words, is Biden's failure to control the southwest border and at least slow the flow of illegal immigration.

"What Biden has done is, he surrendered the border to drug cartels, coyotes, and human smugglers," Sen. Lindsey Graham (R-S.C.) told Fox News on Thursday.

"He surrendered Afghanistan to terrorists -- the Taliban and al-Qaeda -- and a major terrorist attack is going to come our way. Because, between the combination of allowing Afghanistan to fall back into terrorist hands, and have a completely open and broken border here in the United States, it's just a matter of time that the terrorists come through that border to kill a bunch of us.

"And here's what I want to say to the American people: The man on horseback is there to protect your family. The people rushing our border have put us all under siege. And I think the most inhumane thing going on right now in America is that the men and women of the Border Patrol have been completely abandoned, demagogued, scapegoat(ed), and treated like dirt by elected officials in the Democratic Party and this administration," Graham said.