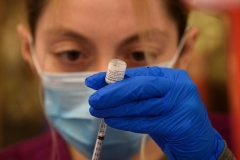 A health care worker prepares a dose of the Pfizer Covid-19 vaccine. (Photo by PATRICK T. FALLON/AFP via Getty Images)

(CNSNews.com) - Arkansas is among the mostly southern states with a low COVID vaccination rate. Cases are rising again, and more people are going to the hospital for treatment of a disease that the vaccine might have prevented.

Arkansas Republican Gov. Asa Hutchinson told ABC's "This Week" that politics may be partly to blame:

Well, you know, there shouldn't be a partisan divide first of all. But, clearly, a conservative is more hesitant about government authority. That's just the nature of it. And so, I think in the Southern states and some rural states, you have that more conservative approach, skepticism about government.

And so, I think that's simply the nature of different views of government. We've got to overcome that mistrust because it -- Republicans, Democrats, we all suffer the same consequence if the delta variant hits us and we're not vaccinated.

Well, one other thing that you see from the data is that early on in the pandemic, the average age of hospitalizations was 64. That has dropped 10 years down to 54. And the reason is the elderly population got vaccinated. They reduced the numbers going to hospital.

But it is that age group between 30 and 54 that is becoming ill, that has not become vaccinated, not good vaccination rates. And so, that hospitalization rate has increased.

And so, what do we do about it? We're working very hard to go to that population through the employers, through trusted advisers, such as the clinics, making sure they have the information and overcoming the hesitancy or just the -- simply we're putting it off approach.

I've started community conversations, going to cities. I'll be in six cities next week in Arkansas, simply talking about what are the concerns, what are the community ideas to how we can do this better in terms of increasing that population and their vaccination rate.

Hutchinson said he welcomes the help of churches and other community groups that are going door-to-door to encourage vaccinations.

"We want all the help we can get in order to accomplish a mutual goal of increasing vaccinations," he said.

"So there's nothing dramatic about what the president said, in itself. No one wants an agent knocking on a door. But we do want those that do not have access otherwise to make sure they know about it and having the information.

And when school starts in the fall, he said students will not be required to wear masks, but he did say children 12 and over should get vaccinated "to be safe in schools."