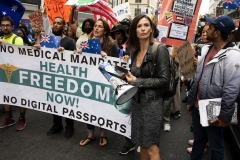 (CNSNews.com) - "I'm for reducing mandates across the board in regard to the vaccinations," Arkansas Gov. Asa Hutchinson told CNN's "State of the Union" on Sunday, even though he conceded that mandates "would probably increase vaccination rates."

"But it also would increase the resistance of some," Hutchinson said:

Some would lose their job. It would hurt their families. And it would in the broader population also create that controversy and resistance. So it's a balance there.

And that's why private businesses should have the opportunity...if they want to require a vaccination in their sensitive workplace, they ought to be able to do that. But government doesn't need to tell them to do that. I'm for reducing mandates across the board in regard to the vaccinations.

People will make the right decision over time when they get the right information. And so, sure, Tyson's have required vaccination. Their rate goes up. Others that are urging it to happen in their workplace, it goes up there as well.

And so I think it's a balance. But what works in Arkansas is not the mandate side of it, but it's the education side and businesses having the prerogative to make their own decision without the government telling them what to do.

President Biden's COVID task force announced last week that it is ready to roll out shots for children ages 5-11 as soon as federal health authorities approve vaccination for that age group.

Task force coordinator Jeff Zients said it's up to schools to decide if COVID vaccination should be a condition of attending in-person classes: "We know that in general, requirements work, and we support states and school districts taking actions to ensure that everyone who's eligible get vaccinated, but again, those decisions should be made at the state and local level."

Hutchinson agreed that vaccination requirements for students are a "state-by-state" decision.

"And so it could happen down the road. It also depends upon the severity of the COVID outbreak and whether the cases skyrocket again or not. Right now, they're at a very low level in Arkansas. And so it can happen. It may happen. But now's not the right time to do that. We need to know more information and to be able to build public confidence at a greater point. But it is a state decision," he said.

Hutchinson said his state, which has one of the lowest vaccination rates (47.6 percent), is "making progress."

But I don't see that controversy going away any time soon. With OSHA issuing mandates for businesses to require vaccination of employees, that's going to intensify the controversy.

We can make progress step by step in terms of increasing vaccination, but the side circus in terms of that controversy, there will be lawsuits filed. So that's going to continue for some time.

We're going to continue to push for vaccine adoption. Whenever you see what's happened in the U.K. with an increase in cases, we know that COVID can throw us more curves coming down the road. We want to be prepared with increased vaccination.