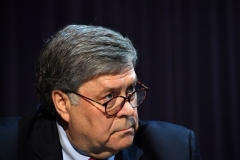 (CNSNews.com) - Attorney General William Barr says he's "appalled" by the violence we're seeing around the country, and he faulted the liberal media for lying to the American people.

It's happening right out in the streets. Anyone with eyes can see what's happening. They see the violence. They see these groups of agitators in their black outfits and their helmets and their shields which incidentally have the hammer and sickle on them most of the time. Rushing the police, causing violence, throwing rocks, people showing up with the rocks and with frozen bottles -- that's happening.

Barr noted that the big media outlets are corporate-owned entities "that pretty much toe the party line."

The reporting is all the same, right down to the words and phrases and talking points used. "It's become extremely monolithic. And it's wedded in many ways to the Democratic Party.  It's a partisan press, largely."

Barr said he knew the nation was in trouble when people started using the word "narrative."