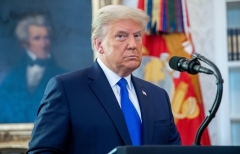 (CNSNews.com) - With 16 days left in the Trump presidency, the talk on MSNBC on Monday morning turned to impeaching President Donald Trump once again, this time over his phone call with Georgia election officials.

"Even if he won't be removed and indicted by the Senate, President Trump deserves the historical stain, the permanent stain, of impeachment," Kurt Bardella, former spokesman for the House Oversight Committee, told MSNBC's "Morning Joe."

In the hour-long phone call on Saturday, apparently taped without Trump's knowledge by a person not identified, Trump told Georgia Secretary of State Brad Raffensperger, "I think it’s pretty clear that we won. We won very substantially, Georgia."

Trump went through a list of what he considers to be votes denied, votes wrongly counted, votes not signature matched, ballots corrupted. Trump was making the point that a proper audit would gain him the votes he needed to win the state, which already has certified its election results for Joe Biden.

Then Trump said this, and the left-wing media went ballistic:

But they are shredding ballots, in my opinion, based on what I’ve heard. And they are removing machinery, and they’re moving it as fast as they can, both of which are criminal finds. And you can’t let it happen, and you are letting it happen. You know, I mean, I’m notifying you that you’re letting it happen.

And flipping the state is a great testament to our country because, you know, this is — it’s a testament that they can admit to a mistake or whatever you want to call it. If it was a mistake, I don’t know. A lot of people think it wasn’t a mistake. It was much more criminal than that. But it’s a big problem in Georgia, and it’s not a problem that’s going away. I mean, you know, it’s not a problem that’s going away.

MSNBC's Joe Scarborough, host of "Morning Joe," asked Bardella on Monday, "What should the Democrats in the House do? What should the oversight committee do right now?"

Well, I'll tell you, Joe, you know, if I were the House Democrats, there's nothing stopping me right now from convening the Oversight or Judiciary committee, play the audio in full for an hour straight, make every member sit there and listen to it. And then vote on impeachment right there, because there has to be a cost for these things.

And even if he won't be removed and indicted by the Senate, President Trump deserves the historical stain, the permanent stain, of impeachment. There's a reason why these processes exist in the first place. It's to have some measure of accountability even if not in real time but for the future and for that context.

It has to be very made clear by a coequal branch of government that what Donald Trump is caught on tape doing is illegal, it's wrong, it's undemocratic. There has to be some mechanism for accountability...

The Justice Department has to open an investigation. It's got to be run by career officials. They have got to interview everyone and find stuff out.

And then I think the House and Senate need to be, unfortunately, thinking about impeachment again. And I know that that's like the last thing many people want. They just want to be done with Donald Trump in 16 days. But, you know, the Constitution expressly says in it that impeachment is about barring people from holding future office.

And so certainly it wouldn't be about trying to get him out in the next 16 days, but it'd be about drawing a red line in the sand that says you're the president of the United States. What have you been doing here?

The word anti-democratic is thrown around a lot in this context. But here's what it really looks like. Millions of Americans went to the polls to vote for one candidate or the other, and what Trump is trying to do behind closed doors is pressure Georgia to throw out that vote and just to stall their own vote.

The FBI has primary investigative authority in this kind of a case. Either the U.S. Attorney in the Northern District of Georgia or in the District of Columbia, perhaps both, could be working with the FBI.

I think we need to let the justice system actually restart its engine and go to work here, because the truth matters, and ultimately, that's what criminal justice is about. Getting to the truth and holding people accountable.

And in some ways, perhaps, this is an opportunity for Americans to regain faith in our possibility to function as a rule of law country where, instead of leaping to conclusions, instead of engaging in mob justice, we can let competent career people do their jobs and then, if it's appropriate, bring an indictment to court.