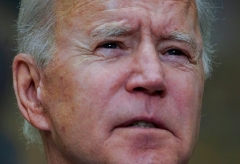 (CNSNews.com) - The economy added a healthy 379,000 jobs in February, and the unemployment rate dropped a tenth of a point to 6.2 percent.

A year ago February, the nation's unemployment rate was 3.5 percent, a fifty-year low; but that was before coronavirus caused parts of the economy to shut down.

The number of employed Americans, 150,239,000, increased in February for the tenth month in a row. That's a gain of 208,000 from January, as more states start to relax COVID restrictions.

According to the Labor Department's Bureau of Labor Statistics, "In February, most of the job gains occurred in leisure and hospitality, with smaller gains in temporary help services, health care and social assistance, retail trade, and manufacturing. Employment declined in state and local government education, construction, and mining."

In February, the civilian non-institutional population in the United States was 260,918,000. That included all people 16 and older who did not live in an institution, such as a prison, nursing home or long-term care facility.

Of that civilian non-institutional population, 160,211,000 were participating in the labor force, meaning they either had a job or were actively seeking one during the last month. This resulted in a labor force participation rate of 61.4 percent in February, the same as it was in January, but 1.9 percentage points lower than it was a year earlier as the pandemic took hold.

Economist Stephen Moore said the "tremendous" February jobs report "shows we don't need another $2 trillion dollar stimulus bill. We need to get states reopened. The number of COVID cases is down dramatically. The success of Operation Warp Speed and the vaccine have been the best stimulus of all."

Moore noted that four Democrat-majority states -- New York, New Jersey, California, and Illinois -- are "holding back even better economic growth" by limiting the extent to which businesses may reopen. "We don't need to be spending trillions in taxpayer dollars on a bill that bails out poorly run blue states and discourages people getting back to work."

Federal Reserve Chairman Jerome Powell, testifying before the House Financial Services Committee last month, said, "There's a lot of slack in the labor market, and a long way to go to maximum employment."

He noted that around 10 million fewer people have jobs compared with a year ago, and although the unemployment rate in January was 6.3 percent, "if you include people who were in the labor force and indeed working in February and a couple of other adjustments, you get to almost a 10 percent unemployment rate."

Powell said more people will go back to work as the economy opens up:

But what we're going to find, based on some of the surveys we've heard about, is that not all those jobs are going to come back, because people have started to implement automation and things like that. These are--these are service sector jobs and that's been an ongoing process. It will have been accelerated.

So, many of those people may find it hard to get back to work, and I think they're going to need further support. So, I would be looking at that over time as the livelihood that they had in the service sector may not be easy to replace. There just may not be enough jobs. There's going to be a need for training and replacement and support in the meantime so that these people can hang onto the lives that they had and find new work.