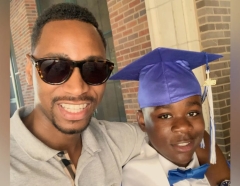 Fox News analyst Gianno Caldwell and his younger brother, Christian Caldwell, who was shot and killed in Chicago on June 24, 2022. (Screenshot, Instagram)

(CNS News) -- Following the murder of his younger brother in Chicago in June, Fox News political analyst Gianno Caldwell pleaded for justice amidst weekly reports of violence, stating, “Living in Chicago should not come with a death warrant.”

Caldwell condemned the city’s “soft-on-crime policies” and called for reversing some of them, a move he told Fox News “could have prevented [his] brother’s death.”

He said, “I talked to…executives of the National Organization of Black Law Enforcement Executives, I’m talking to state legislators. We need to review the soft-on-crime policies. We need to drive legislation to revise or reverse some of these policies. That could have prevented my brother’s death.”

“That could have – because criminals here, they don’t capitulate to the law,” said Caldwell.  “They’re not afraid of the police, they’re not afraid of the prosecutors because the belief there -- from what I was told from some of the young men even yesterday -- is that if someone does something, they’re likely not going to get arrested, or if they do, they might not get prosecuted.”

“So it’s an in-and-out system that must change,” he said, “and we’ve got to get tough on crime in Chicago because literally, lives are on the line.”

On June 24, Caldwell’s 18-year-old brother Christian was killed in a shooting that Chicago police said wounded two other people.

Someone in Morgan Park opened fire and fled in a black sedan at about 2:05 a.m. No arrests were reported.

Caldwell wrote on social media the next day, “Never could I have imagined my baby brother’s life would be stolen from him. Please keep my family in your prayers.”

Yesterday was the worst day of my existence. I received a call informing me that my teenage baby brother was murdered on the south side of Chicago. Never could I have imagined my baby brother’s life would be stolen from him 😭. Please keep my family in your prayers. pic.twitter.com/vtbU7qzcUa

He discussed on Fox and Friends the deadly impacts of the city’s “soft-on-crime policies” for other families, including a Chicagoan he met who was desensitized to his father being shot and hospitalized:

“There was a young man there [at a balloon release event for Christian] who I spoke to because I greeted everyone. And he was saying that he just came from the hospital. And I said, ‘Why?’ And he said, ‘My father was just shot.’ And I said ‘Oh my God, wow, I’m so sorry.’ And he looked at me like, ‘Yeah…I mean, it’s kind of, life.’”

He added, “And the fact that that’s the belief in the city of Chicago where ‘Your number one day will come up and you will be murdered,’ is just beyond belief. We sit here and we talk about the violence of Chicago on a weekly basis, but the people there – they live it. They are afraid to leave their homes.”

“And we’re not talking about people who are involved in any gangs or in street activity – these are normal, everyday, working people who are afraid for their safety,” said Caldwell.

"Living in Chicago should not come with a death warrant, but for so many people there, it does,” he said.

Christian Caldwell was the youngest of nine siblings. Because their mother attended rehab for being addicted to crack cocaine and their father was absent, Gianno considered his younger siblings his children and financially supported them.

Also, among the six people fatally shot that weekend in Chicago was 5-month-old Cecilia Thomas, who was struck in the head while in the rear of a car.

“Year to date, we have over 1,000 shootings in the city of Chicago,” Lopez told Fox News.  “You never hear [Lightfoot] say that the city must do more to get its act together, to put criminals back in their place.”