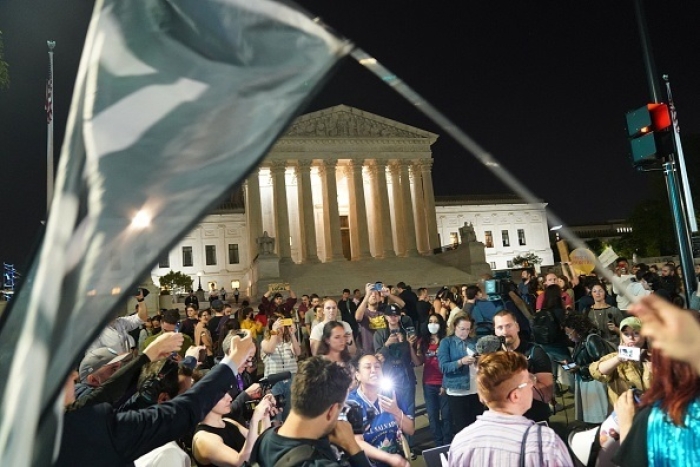 Protestors gathered outside the U.S. Supreme Court on Monday night after publication of a leaked draft of a majority opinion indicating that the court is poised to overturn Roe v. Wade. (Photo by Stefani Reynolds / AFP via Getty Images)

(CNSNews.com) – Vice President Kamala Harris is scheduled to address the national conference of Emily’s List on Tuesday evening, less than 24 hours after Politico’s explosive report on what it says is the leaked initial draft of a Supreme Court opinion overruling Roe v. Wade.

Chanting and placard-waving protestors were quick to arrive at the Supreme Court and were demonstrating into the early hours of Tuesday morning.

Like other groups campaigning to keeping abortion legal, Emily’s List -- a group that works to elect pro-choice Democrat women -- expressed shock on Monday night after the news broke.

Emily’s List President Laphonza Butler vowed to vote out “every official who stands against the pro-choice majority” and to “fight harder than ever to make them pay.”

Emily’s List joined NARAL Pro-Choice America and Planned Parenthood Action Fund in announcing that “as the constitutional right to abortion hangs in peril,” they will together “spend a historic $150 million on the 2022 midterms to ensure the election of reproductive freedom champions up and down the ballot.”

News of the Supreme Court document leak is certain to dominate the proceedings – as it is dominating public discourse and media commentary.

‘Egregiously wrong from the start’

Politico says it has obtained the court’s draft opinion in Dobbs v. Jackson Women’s Health Organization, the case challenging the constitutionality of a Mississippi law banning most abortions after 15 weeks of pregnancy. 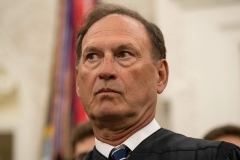 It said that, in a document labeled “Opinion of the Court,” Justice Samuel Alito wrote that “Roe was egregiously wrong from the start,” and stated, “We hold that Roe and Casey must be overruled.”

“It is time to heed the Constitution and return the issue of abortion to the people’s elected representatives,” the document says.

Politico reported that the decision was not final and could still change. Citing a “person familiar with the court’s deliberations,” it said Alito was joined in the opinion by Justices Clarence Thomas, Brett Kavanaugh, Neil Gorsuch, and Amy Coney Barrett.

The report triggered a tsunami of reaction on social media – disbelief and anger, demands that Congress codify Roe v. Wade, calls to action, guarded optimism from pro-lifers, and dismay over the leak itself.

“It’s impossible to overstate the earthquake this will cause inside the Court, in terms of the destruction of trust among the Justices and staff,” commented SCOTUS Blog, which provides independent news and analysis on the court. “This leak is the gravest, most unforgivable sin.”

“If this report is true, this is nothing short of a massive victory for life and will save the lives of millions of innocent babies,” said Sen. Ted Cruz (R-Texas).

“But while I continue to wait for the Supreme Court’s ultimate opinion, I am appalled by the shocking breach of trust posed by this leak,” he continued.

“This is a blatant attempt to intimidate the Court through public pressure rather than reasoned argument. I hope my fellow former clerks and the entire legal community will join me in denouncing this egregious breach of trust.” (Cruz clerked for then-Chief Justice William Rehnquist in the 1990s.)

Mississippi Attorney General Lynn Fitch responded cautiously to the report, saying, “We will let the Supreme Court speak for itself and wait for the Court’s official opinion.”  National Right to Life echoed her words.

“If the draft opinion made public tonight is the final opinion of the court, we wholeheartedly applaud the decision,” said Susan B. Anthony List (SBA List) president Marjorie Dannenfelser.

“The American people have the right to act through their elected officials to debate and enact laws that protect unborn children and honor women.”

“If Roe is indeed overturned, our job will be to build consensus for the strongest protections possible for unborn children and women in every legislature,” Dannenfelser said.

“The Court clearly made a mistake 50 years ago when it took away these decisions from the people, and now we as a nation are so polarized that we forget that there are real people involved,” said Democrats for Life of America executive director Kristen Day. 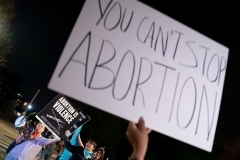 Pro-life and pro-choice activists clashed outside the US Supreme Court on May 2, 2022 following the reported leak of a draft opinion indicating that Roe v. Wade might be overturned. (Photo by STEFANI REYNOLDS/AFP via Getty Images)

She called for “calm, reflection, and, yes, vigorous civil debate on how best to help women and the babies they carry.”

“We will likely see violence from extreme pro-aborts who love abortion so much it will drive them to rage,” LiveAction president Lila Rose predicted on Twitter. “Hold fast and don’t be intimidated by the shrieking & threats. Life is a precious gift and worth standing up for. You are on the side of justice and love.”

Center for Reproductive Rights CEO Nancy Northup said that if the court overturns Roe, “it would represent the most damaging setback to the rights of women in the history of our country.”

Hillary Clinton weighed in: “This decision is a direct assault on the dignity, rights, & lives of women, not to mention decades of settled law. It will kill and subjugate women even as a vast majority of Americans think abortion should be legal. What an utter disgrace.”

“We will fight back,” the Democratic National Committee proclaimed. “Republicans must answer for their relentless attacks on Americans’ rights.”

A call to action also came from Sen. Elizabeth Warren (D-Mass.); “It’s time for the millions who support the Constitution and abortion rights to stand up and make their voices heard. We’re not going back – not ever.”

“Congress must pass legislation that codifies Roe v. Wade as the law of the land in this country NOW,” tweeted Sen. Bernie Sanders (I-Vt.). “And if there aren’t 60 votes in the Senate to do it, and there are not, we must end the filibuster to pass it with 50 votes.”