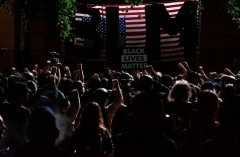 (CNSNews.com) – President Trump has depicted corporations that have pledged money to elements involved in unrest on American streets as weak, naïve, and deluded.

“Money is coming from some very stupid rich people that have no idea that if their thing ever succeeded – which it won’t – they will be thrown to the wolves like you’ve never seen before,” he said in an interview with Laura Ingraham that aired on Fox News on Monday night.

“Corporations have given an enormous amount of money, in the tens of millions, I mean hundreds of millions, to Black Lives Matter, which is all over a lot of these protests,” said Ingraham. “So what does that mean about these corporations? Why are they paying that money out?”

“Because they’re weak people, led by weak people, in many cases,” he said. “Not all corporations are – I looked at numbers where one company’s giving hundreds of millions of dollars.”

Asked what he meant by describing them as weak, Trump said, “Because they just do what’s the easiest path. That’s not the easy path, that’s a very dangerous path. Black Lives Matter is a Marxist organization.”

Trump recounted that a person flying “from a certain city” to Washington to attend the Republican National Convention had been on a plane that “was almost completely loaded with – with thugs wearing these dark uniforms, black uniforms with gear, and this and that.”

He wouldn’t reveal the name of the city the plane came from, saying the matter was “under investigation,” but added that along with a handful of people heading to the RNC, “a lot of people were on the plane to do big damage.”

“But the money is coming from somewhere,” said Ingraham. “How can it be tracked?”

“Money is coming from some very stupid rich people that have no idea that if their thing ever succeeded – which it won’t – they will be thrown to the wolves like you’ve never seen before.”

Amid protests that erupted across the nation after a white police officer killed George Floyd in Minneapolis last May, some of America’s biggest corporations – including Nike, Google, Microsoft, Apple and Amazon – announced donations to Black Lives Matter and other organizations focused on social justice for black communities.

Trump told Ingraham Democratic presidential nominee Joe Biden is “a weak person” who is “controlled like a puppet.”

If he wins the election, he continued, “they will have won.”

“They will have taken over your cities. It’s a revolution – you understand that, it’s a revolution. And the people of this country will not stand for that.”

After Trump claimed that Biden isn’t in control of anything, Ingraham asked, “Who do you think is pulling Biden’s strings? Is it former Obama officials?”

“People that you’ve never heard of, people that are in the dark shadows,” Trump responded.

“What does that mean? That sounds like a conspiracy theory,” she said. “Dark shadows – what is that?”