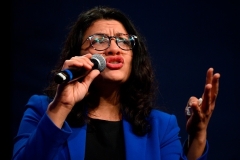 (CNSNews.com) – Muslim leaders, including Reps. Rashida Tlaib (D-Mich.) and Ilhan Omar (D-Minn.), expressed the hope and expectation on Sunday that Muslim voters would be a deciding factor in the pivotal Senate runoff election in the state of Georgia early next month. The early voting period begins on Monday.

Participating in an online “vote-a-thon” co-hosted by the Georgia chapter of the Council on American-Islamic Relations (CAIR) and Georgia Muslim Voter Project, Tlaib said: "I hope that you realize just the opportunity here that Allah has given us to show the power of Muslims in Georgia.”

“I want people to be like, oh my God, I didn’t even know Muslims are in Georgia,” she said. “Exactly! Because we’re going to show them in droves of numbers.”

“I want to, mash’allah [what Allah has willed] be able to say, ‘Look at the voting in these precincts and guess what? It was the Muslim vote that delivered Georgia,’ ” Tlaib said.

Omar said Muslim voters in Georgia had played a big part in delivering the result on November 3 that necessitated the runoff, and voiced the hope that the same would apply on January 5.

“I do hope that when the election is decided on January 5, and people are able to analyze who came out and voted, we will hear that the Muslims in Georgia were a big part of making the right decision in this historic election,” she said. 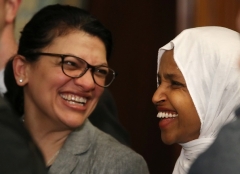 Omar and Tlaib in 2018 became the first two Muslim women to be elected to the U.S. Congress.

In next month’s runoff, Republican Sens. David Perdue and Kelly Loeffler are fighting off challenges from Democrats Jon Ossoff and Raphael Warnock respectively. The outcome will determine control of the Senate for the next two years at least.

Another participant in the livestreamed event on Sunday was Palestinian American activist and Women’s March co-founder Linda Sarsour.

“You, the Muslim community in Georgia, by yourselves, can literally swing this entire election and send two Democrats to the U.S. Senate, which makes Kamala Harris the deciding vote,” she said. “And you can actually alleviate harm and suffering on millions of immigrants in this country, particularly on the issue of immigration reform.”

According to the most recent figures available from the Association of Religious Data Archives, there were an estimated 52,578 Muslim “adherents” in Georgia in 2010, a figure which ARDA said marked a 35 percent over the previous decade.

According to CAIR, which calls itself the nation’s biggest Muslim civil rights and advocacy group, the state today “is home to an estimated 150,000 Americans Muslims, including at least 71,000 registered Muslim voters.”

In November’s election, Perdue beat Ossoff by 88,908 votes, and Warnock beat Loeffler by 343,821 votes (in a special election contest with 21 candidates on the ballot).

Institute for Social Policy and Understanding director of research Dalia Mogahed, also taking part in the livestream, said research has found that the number of unregistered Muslim voters across the United States has almost halved in the past four years – from 39 percent in 2016 to 21 percent in 2020.

At the same time, she said, Muslim voter registration still lags behind that of other religious communities – 78 percent of Muslims legally able to vote were registered in 2020, compared to 92 percent of Catholics, 91 percent of white evangelicals, 90 percent of Jews, and 88 percent of Protestants.