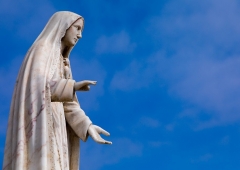 A file photo of a statue of the Virgin Mary. (Photo by Eric Lafforgue/Art In All Of Us/Corbis via Getty Images)

(CNSNews.com) – Boston police are investigating the deliberate setting alight of a statue of the Virgin Mary outside a Roman Catholic church in the city’s Dorchester neighborhood, an incident coming less than two days after a statue of Mary was vandalized in New York City, and after a man tried to set fire to a church in Florida.

According to the Boston Fire Department’s Fire Investigation Unit, one or more unknown suspects set fire to plastic flowers that had been placed in the hands of the statue outside the Saint Peter Parish Church, causing burn damage to the face and torso.

The Boston Police Department said officers responded to a call around 10 PM on Saturday night. The matter was under investigation and anyone with information was been asked by call a Crime Stoppers tip line on 1 (800) 494-TIPS.

“The Boston Police Department will stringently guard and protect the identities of all those who wish to assist this investigation in an anonymous manner,” it said.

“Whoever is responsible for the desecration of the Holy Mother’s statue is clearly a troubled soul,” a spokesman for Cardinal Sean O’Malley said in a statement. “Mary represents all that is good and pure in our world.”

“The image of Our Lady is so important for us and our faith,” Fr. John Curran told the local ABC affiliate WCVB-TV. He described the attempted arson as “such a contradiction to her love.”

“Mary would never desecrate anyone, never hurt anyone. Only offer the peace and the love of Jesus. So I think that’s where it really hits us, in our hearts.”

Built in the late 19th century in the historic Meetinghouse Hill section of Dorchester to serve a large immigrant population, Saint Peter Parish Church describes itself as “an urban, multi-ethnic, socially, culturally, and educationally diverse faith community.” Parishioners include Asian and African immigrants, especially from Vietnamese and Cape Verdean communities.

Early on Friday morning a Virgin Mary statue at the Cathedral Prep School and Seminary in Elmhurst, Queens was spray-painted with the word “idol.”

“This is the sign of the times,” tweeted Fr. James Kuroly, rector and president of Cathedral Prep. “Disrespect. Disregard. Hate. But love prevails. Only a few moments after, a man came to clean the graffiti. Today was a reminder that hate doesn’t have the last word.”

The NYPD released blurry surveillance camera footage showing the perpetrator, asking anyone with information regarding the person’s identity to call its Crime Stoppers tip line on 1-800-577-TIPS (8477).

The Brooklyn Diocese press office reported that the department was investigating an act of vandalism “as a possible hate crime.”

Meanwhile in Ocala, Florida, police on Saturday chased and arrested a man, “after receiving reports of someone setting fire to the sanctuary [of the Queen of Peace Catholic Church] while several parishioners were inside preparing for a morning mass.”

The Marion County Sheriff's Office said a man had “intentionally crashed a vehicle through the front doors of the church, exited the vehicle and poured gasoline out into the foyer area and then lit it on fire,” before fleeing in the car.

“The parishioners were able to escape without injury and Marion County Fire Rescue personnel were able to quickly extinguish the fire.”

The suspect, named as Steven Anthony Shields, 24, has been charged with attempted second-degree murder, arson and other felony offenses.

“We praise God that no one was injured,” said the Diocese of Orlando. “We join in prayer for Father [Patrick] O’Doherty, the parishioners of Queen of Peace Catholic Church, our first responders and the gentleman who caused this damage. May we come to know the Peace of the Lord.”

“Our freedom of worship granted in the Constitution is a freedom that we all hold dear,” Sheriff Billy Woods said in a statement. “My deputies and I are sworn to protect that right and will always ensure our citizens can worship in peace. I’m proud of my deputies for capturing this man so quickly and we appreciate the assistance from all of the state and federal agencies that worked alongside of us during this investigation.”

The incidents come amid nationwide cases of vandalism and destruction of statues and monuments in the context of “Black Lives Matter” protests sparked by the death of George Floyd.

BLM activist Shaun King in a series of tweets last month suggested that images depicting a Europeanized conception of Jesus and Mary were a form of “white supremacy” and should be targeted.

“All murals and stained glass windows of white Jesus, and his European mother, and their white friends should also come down,” he tweeted.