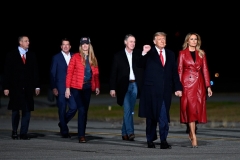 President Trump holds a rally on Dec. 5 to support Republican Sens. David Perdue and Kelly Loeffler (shown behind him) in Valdosta, Georgia. (Photo by ANDREW CABALLERO-REYNOLDS/AFP via Getty Images)

(CNSNews.com) – Christian conservative leaders rallied in Georgia on Tuesday night, to emphasize the stakes in next month’s crucial runoff election. They warned that ceding Republican control of the Senate would pave the way for an agenda of creeping socialism, Supreme Court packing, and attacks on religious freedom.

“When we roll out of bed tomorrow morning,” said Faith and Freedom Coalition President Ralph Reed, “we are going to be 19 days away from what is without question one of the most important U.S. Senate elections in the history of this country.”

Since U.S. senators first started to be elected by popular vote, he said, “there has never been a time in that intervening century, when control of the U.S. Senate was decided in two races, on one day, in one state. It’s never happened. It’s going to happen 19 days from tomorrow morning.”

“I can’t think of a better place to stop socialism than the great state of Georgia,” said conservative radio host Todd Starnes. “You know, they say ‘The Devil Went Down to Georgia,’ but so did a lot of saints of God, and we’re going to give them a good fight come election day.”

Also with socialism on his mind was Abraham Hamilton, general counsel and public policy analyst at the American Family Association, who said there was an idea going around right now that “the death, poverty and destruction that has always followed socialism all of a sudden vanishes into thin air if you put the word ‘democratic’ in front of it.”

He then spoke about the example of Venezuela, transformed under socialist leaders Hugo Chavez and Nicolás Maduro from an oil-rich nation in 1998 to an economic basket case today.

“If you think putting the word ‘democratic’ in front of ‘socialism’ makes it kinder, gentler, I have news for you,” Hamilton said. “You’ll vote for socialism – but once.”

‘There has never been a starker contrast’

During his address, Reed recalled previous Senate runoff elections in Georgia, both won by Republicans, in 1992 and in 2008.

He argued that those GOP victories had helped to put the brakes on the wave of liberal governance that had been widely predicted as a result of the victories of Presidents Clinton and Obama respectively, laying the groundwork for Republicans to take control of both the House and Senate two years after Clinton was elected – for the first time since 1952 – and control of the House two years after Obama’s election win. 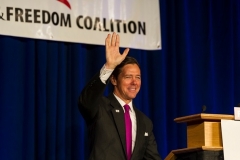 Reed, who grew up in Georgia and is a former Georgia Republican chairman, said the state now once again has such an opportunity.

“In my lifetime, there has never been a starker contrast or a wider chasm on philosophy and issues than between these four candidates,” he said.

“And if [the Democrats] win these two seats, make no mistake about it. The first thing they do after they make Chuck Schumer majority leader of the U.S. Senate, the first thing they will do is they will abolish the filibuster. And when they do that, we lose all minority rights.”

And on the foreign policy front, he added, “there’s not telling what kind of agreement they will ratify with Iran, the leading state sponsor of terror in the world, that is devoted to the destruction of the United States and the State of Israel.”

“Before the dust settles we’ll knock on 600,000 doors, we’ll make a million phone calls, we’ll put a million voter guides into 5,500 churches, we’ll send out two-and-a-half million get out the vote text messages and digital ads,” he said. “And if by two o’clock on election day, if you’re a Bible-believing evangelical Christian and you haven’t voted yet, we’re going to go to your house, we’re going to give you a ride to the polls, and we’re going to make sure you vote, and we’re going to bring this thing home.”

In the Nov. 3 election, Purdue beat Ossoff by 88,908 votes, while Warnock beat Loeffler by 343,821 votes, in a special election contest with 21 candidates on the ballot.

See also:
Tlaib: 'I Hope You Realize Just the Opportunity Here That Allah Has Given Us to Show the Power of Muslims in Georgia’ (Dec. 14, 2020)