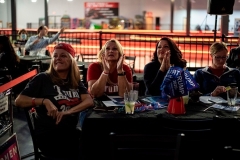 Trump supporters in Austin, Texas cheer as results come in on Tuesday night. (Photo by Sergio Flores/AFP via Getty Images)

(CNSNews.com) – The race for the presidency remained too close to call early on Wednesday morning, although President Trump’s chances were looking stronger than opinion polls had suggested, with an apparent victory in Florida a major boost to his campaign.

A CBS News exit poll found that Florida voters who thought the economy was the most important factor broke 84-15 percent for the president. It also found that Democratic nominee Joe Biden beat Trump among Latino voters in the state by just five points – compared to Hillary Clinton’s 27-point margin (62-35) with that voting group in 2016.

Meanwhile Biden was projected by Fox News to have won Arizona, which has gone Republican in every presidential election since the 1950s – with the exception of Bill Clinton’s win in 1996. (CBS News had Arizona leaning to Biden.)

But with millions of absentee ballots yet untallied in the key battleground states of Wisconsin, Michigan and Pennsylvania, and counting holdups in Georgia, it looked as though there would still be some way to go before a clearer picture emerged. 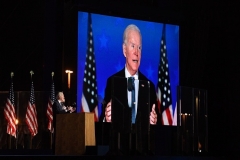 Biden emerged in Wilmington, Delaware around 12:30 AM, calling for patience.

“We believe we’re on track to win this election,” he said.

“We’re going to have to be patient until we – the hard work of tallying votes is finished. And it ain’t over ’til every vote is counted.”

He expressed confidence about winning Pennsylvania, and said “we’re feeling real good about Wisconsin and Michigan.”

Soon after Biden spoke Trump tweeted, “We are up BIG, but they are trying to STEAL the Election. We will never let them do it. Votes cannot be cast after the Polls are closed!”

Trump also tweeted, “I will be making a statement tonight. A big WIN!”

By around 1:30 AM eastern, some of the electoral college tallies put out by networks and agencies began to shift in favor of Trump, with both NBC News and ABC News giving him 212 electoral college votes to Biden’s 209, while CBS News had Trump at 210, Biden at 207.

Two hundred and seventy electoral college votes are needed for a candidate to win.