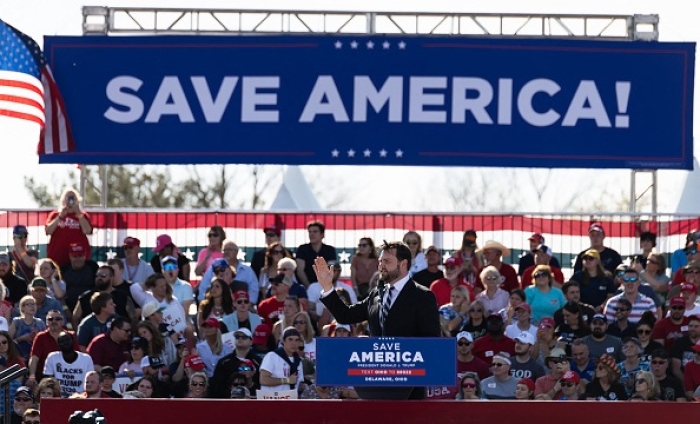 J.D. Vance won the Republican U.S. Senate primary in Ohio. He appeared with former President Donald Trump at a rally in Ohio on April 23, 2022. (Photo by MEGAN JELINGER/AFP via Getty Images)

(CNSNews.com) – On a day when the possible reversal of Roe v. Wade dominated the headlines, pro-life Republicans won primary elections in several states.

On Monday, Vance reacted to Politico's report on the leak of a draft Supreme Court opinion, tweeting: "Hope the news of the leaked opinion is true. Would be an amazing victory for the pro life movement and, most importantly, the innocents we fight for."

Vance will run against Democrat Rep. Tim Ryan in November. Ryan earned an F from the pro-life Susan B. Anthony List “for his consistent pro-abortion voting record.”

Also winning her GOP primary in Ohio’s 13th congressional district was conservative attorney Madison Gesiotto Gilbert, who describes herself as “proudly and unapologetically pro-life” and supportive of the overturning of Roe v. Wade.

In 2020, a record number of prolife Republican women won seats in the U.S. House.

Six months out from crucial midterm elections, the leaking of the Supreme Court opinion is firing up Democrats.

“Make no mistake: reproductive rights will be on the ballot and this midterm election is more important now than ever before,” the Democratic National Committee said Tuesday.

“Voters will make their voices heard, we will fight back with everything we have, and Republicans will have to answer for their party’s relentless attacks on Americans’ rights.”

President Biden in his statement responding to the leaked court opinion also expressed the importance of the November election.

“If the Court does overturn Roe, it will fall on our nation’s elected officials at all levels of government to protect a woman’s right to choose,” he said. “And it will fall on voters to elect pro-choice officials this November.

“At the federal level, we will need more pro-choice Senators and a pro-choice majority in the House to adopt legislation that codifies Roe, which I will work to pass and sign into law.”