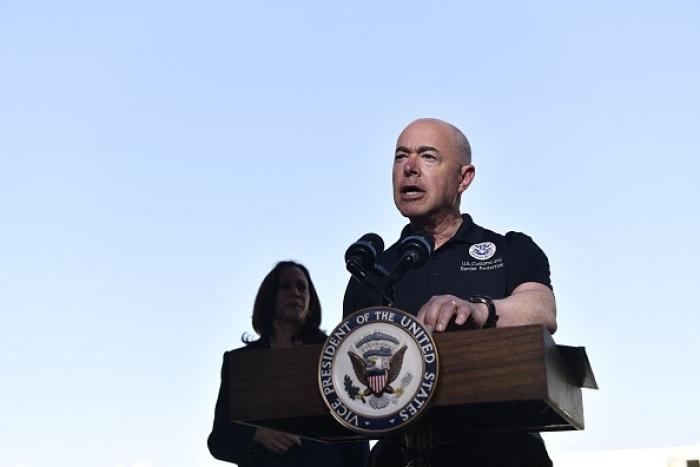 (CNSNews.com) – Homeland Security Secretary Alejandro Mayorkas said on Sunday he was not concerned at the prospect that a Republican-controlled Congress could impeach him, saying he was focused on the department’s mission and workforce.

Mayorkas, who was grilled during congressional testimony last week over the situation along the porous southwest border, the looming lifting of Title 42, and the controversial establishment of a “Disinformation Governance Board,” appeared on CNN’s “State of the Union.”

“I’m sure you have heard that Kevin McCarthy, now the Republican leader, who hopes to be speaker if Republicans take over in November, will consider impeaching you. Your response?” she asked.

“I am incredibly proud to work with 250,000 dedicated and talented personnel, and I look forward to continuing to do so,” Mayorkas said with a slight smile.

“No concern about that?” Bash asked.

“I am not. I am focused on mission and supporting our incredible work force.”

During a visit to the border with GOP colleagues last week, McCarthy raised the question of impeachment.

“This is his moment in time to do his job,” he told reporters, in reference to Mayorkas. “But at any time if someone is derelict in their job, there is always the option of impeaching somebody.”

McCarthy said Mayorkas had 30 days until the Biden administration was planning to do away with Title 42, the public health authority to expel illegal migrants without a court hearing due to concerns about the spread of COVID-19.

Republicans are concerned that the lifting of Title 42 will significantly worsen an already chaotic situation along the U.S.-Mexico border, where the U.S. Customs and Border Protection reported 221,303 “encounters” in March with migrants trying to cross into the U.S. – the highest monthly number on record.

“His first response to us should be, ‘We should not lift Title 42,’” McCarthy said of Mayorkas. “They’re not prepared to protect, and we cannot sustain what will happen to this nation.”

On the CNN show, Mayorkas was asked about his department’s own estimate that a lifting of Title 42 could see the number of border apprehensions rise from around 7,000 a day to as many as 18,000.

“It is our responsibility to be prepared for different scenarios. And that is what we are doing,” he said. “There is no question that if, in fact, we reach that number, that is going to be an extraordinary strain on our system. But we are preparing for it.”

Mayorkas said the DHS would continue to implement Title 42, “and when it ends, we will use the other immigration enforcement provisions or the authorities at our discretion” to deal with illegal migrants.

“So, you, as the secretary of homeland security, don't have an opinion on whether Title 42 should or should not be in place?” Bash asked.

“I do not,” Mayorkas replied, “because I’m not a public health expert.”

The Biden administration wants to halt Title 42 expulsions on May 23 – in three weeks’ time. On Thursday a federal judge issued a temporary restraining order against implementing the policy.

The measure, which has with 31 Republican co-sponsors, accuses Mayorkas of having “presided over a reckless abandonment of border security and immigration enforcement,” and “failing to maintain operational control of the border and releasing hundreds of thousands of illegal aliens into the interior of the United States.”

It charges that his policies have also “led to a significant increase in illegal drug smuggling across the southern border,” and have placed Americans at risk of COVID-19 “by refusing to take necessary steps to prevent potentially contagious illegal aliens from entering the United States.”

In his testimony before the Homeland Security Committee last Wednesday, Mayorkas said the DHS has been “executing a comprehensive strategy to secure our borders and rebuild our immigration system.”

“We inherited a broken and dismantled system that is already under strain. It is not built to manage the current levels and types of migratory flows,” he said. “Only Congress can fix this.”

“Yet we have effectively managed an unprecedented number of noncitizens seeking to enter the United States and interdicted more drugs and disrupted more smuggling operations than ever before.”