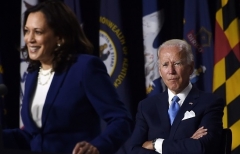 (CNSNews.com) – Presumptive Democratic presidential nominee Joe Biden picked Sen. Kamala Harris as his running mate less than nine months after he appeared to have forgotten for a moment that she existed.

Then, when corrected on the oversight, Biden suggested – incorrectly – that he was being misrepresented.

The exchange came during a debate in Atlanta among the then ten leading candidates for the Democratic nomination, hosted by MSNBC last November.

Facing implied doubts from Sen. Cory Booker (N.J.) about his ability to attract support in the black community, Biden declared, “I’m part of that Obama coalition. I come out of a black community, in terms of my support.”

“If you notice, I have more people supporting me in the black community, that have announced for me because they know me, they know who I am,” he continued. “Three former chairs of the black caucus, the only bla— African-American woman that’s ever been elected to the United States Senate, a whole range of people. My point is—”

“No, that’s not true,” Harris interjected, echoed by Booker.

“The other one is here,” said Harris.

Biden looked startled for a second, then said, amid laughter from the audience and others on the platform, “Oh, I said the first. I said the first African-American elected. The first …”

Harris afterwards posted a tweet alluding to Biden’s flub: “Proud to be the second Black woman elected to the U.S. Senate. #DemDebate”

Former Sen. Carol Moseley Braun (D-Ill.) in November 1992 became the first African American woman elected to the U.S. Senate, serving one term before being defeated in the 1998 midterm election. She endorsed Biden in April 2019.

Harris served as a prosecutor in California before becoming the San Francisco district attorney, and then being elected California attorney general in 2010. In 2016, she became the second black woman elected to the Senate.

“I have no doubt that I picked the right person to join me as the next vice president of the United States of America,” Biden said in Wilmington, Delaware on Wednesday, at his first joint appearance with Harris.

“This morning, all across the nation, little girls woke up, especially little black and brown girls, who so often feel overlooked and undervalued in our communities, but today, today just maybe they’re seeing themselves, for the first time, in a new way.”